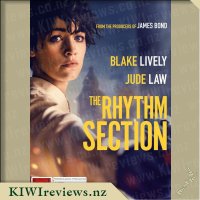 I was expecting a thriller with plenty of action, a predictable plot, and some fun gadgetry as is usual in a spy movie - after all, the cover information emphasizes that the Rhythm Section is produced by the same team that was responsible for the James Bond movies. But there is little resemblance to the tongue-in-cheek humour of the Bond series, and even fewer of the flamboyant chase routines that characterise them. The Rhythm Section does feature the occasional pursuit, but some of these are on foot rather than in fast cars - and it Is often difficult to figure out just who is doing the chasing. Or why!

This is an altogether darker movie which tries to present an assassin's development but dwells too long on analysis - together with frequent loaded pauses, downcast attitudes, "training" which borders on physical abuse, and seemingly senseless deaths. I kept waiting for something to happen, for the pace to pick up, but somehow it never did. There was the potential for the movie to stop taking itself so seriously and to throw in some action: with a little judicious editing this approach might have worked better.

Despite the loose story-line and the lack of energy, the individual actors deliver credible performances. Blake Lively (Stephanie/Petra) manages to portray the vulnerability of her character as she transitions from a life of prostitution and addiction to the honing of her body into a lethal fighting machine, urged on by the knowledge that her parents' death was not an accident but collateral damage as a result of a terrorist act. Her physical (and emotional) development is presented warts and all, and some of the punishing routines she has to pursue are unlikely to make the viewers think she has had an easy transformation!

Iain Boyd (Jude Law) is a task master with a single goal: to train Stephanie to the point where she is able to kill without compunction. He drives her relentlessly, insisting on perfection, and proving to be unforgiving when she falls short of his expectations. It is hard to see him as a sympathetic character although ostensibly his aim is to "help" Stephanie to avenge her parents' death. There again, none of the characters inspires the immediate rapport that might be expected between the main protagonists and the audience. It is left to the viewers to impose their own meaning on the film. In other words, this is a story that is open to interpretation.

As an art house thriller as opposed to an action flick, The Rhythm Section is rather more successful. The constant changes of scenery are visually impressive, each showing a unique view of a particular part of the world, and the accompanying soundtrack picks up on the emotions and movement of each scene - mixing styles and origins with a view to inspiring particular responses from the audience regardless of authenticity. I actually liked this technique, finding it more useful for following the action than the dialogue proper! Given that there were frequent sections with no dialogue at all, this music was invaluable in setting the scene.

The title of the movie, "The Rhythm Section", intrigued me - but this is explained quite early on. Just as an orchestra consists of a variety of instruments, each playing its own part while aligning itself to the rest so as to ensure a harmonious whole, the rhythm section keeps the other players together. In the same way, the human body has to be synchronised so that all the parts work smoothly as a single unit. In effect, the plot is as much about Stephanie's reclaiming and healing her own body as about revenge; perhaps more so.