« Geronimo Stilton and the Kingdom of Fantasy #6: The Search for Treasure review 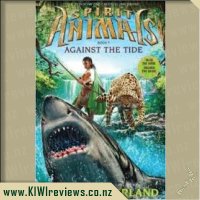 The sun is shining in the Hundred Isles and yet the path forward seems crowded with shadows, Conor, Abeke, Meilin and Rollan have travelled across the world seeking a set of powerful talismans in order to keep them from enemy hands.

Throughout their journey the young heroes have been hounded by pursuers who always seem to know just where to find them. Now they know why. One of them is a traitor. As they steer the crystal blue waters of this tropical paradise, the team can't help but suspect each other. There's a spy in their midst and before this mission is over, a deadly trap will close around them.

My daughter now 12 has been hooked on this series since the begining so as such I have read and kept up with the books alongside. Although fantasy isn't my favourite genre I have too been enjoying the series as, as Fantasy goes this tale is not too bad a storyline. The four children summon the four great fallen beasts and together must save Erdas from the turmoil that is wreaking havoc on their own lands.

I won't give to much away but wow such an unexpected twist in the storyline that I really was not expecting. The children have all seemed to have grown and bonded with their animals and it is great to see that development and maturity arising. I sense we may be nearing the end of the series now with maybe one or two books to go so I am excited to read those and see how this series ends, the ending of this book has left me in a bit of shock with the twist that I could not of pre empted.

I get the distinct implication that this series is now reaching it's end, or at least it's first end, there is no telling how much longer the series will develop past the end of the first set of books (*cough* 39 clues). As expected, the plot is now beginning to thicken, breaking out of the short phase of repetitive plots in the middle of the series, and is now entering a phase of growing intensity leading up to a hopefully explosive conclusion. The best twist in this plot was the fact that while all the other great beasts had to be found by the 4 young heroes, but in this book the situation was reversed, the Great Beast SUMMONED the 4 heroes to him, and I think that is what made this book more interesting than the others.

I was very excited to learn more about the endgame that the two evil Great Beasts as well as the faction known as the Conquerors have up their sleeves. I thought that the certain distrust that was caused by the potential of a mole among the group added a little spice to the mix, and I thought that this gave the book a bit of a unique twist, separating it from the general storylines of the other books. I find interest in watching the 4 main characters further develop their bonds with their spirit animals, it has been a real journey, and it is exciting to watch 4 once innocent and somewhat naive children have their lives changed by them summoning the 4 fallen Great Beasts, and now seeing what they have become.There were one or two moments where I was able to foresee the events that would unfold in the ensuing plot, but other than that, the plot was spontaneous and unpredictable, with plenty of interesting twists, including one which I believe will make anyone rethink everything they have learned over the course of this series (*wink wink*).

The price is, as usual, within reasonable parameters, I think it is a little cheaper than I expected, but that speck of doubt is small enough to be flicked off my conscience, so I shall give the price a full 10/10 score. While I would like to re-read the series again sometime, I am in no big hurry, as this series is based around a fantasy base, which just doesn't quite appeal to my nerdy mind like a good sci-fi series does, so that aspect will get a small dent in it's score, but I must be honest, and I feel confident in my judgment. To give a generalized summary of my opinion towards this book: highly positive.

Join Emma Jacks, 8, at Spy School! Agents have to learn to keep secrets. Sometimes birthday secrets are the hardest ones to keep...