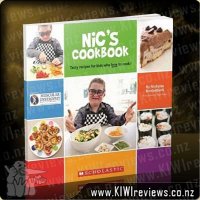 Disclosure StatementFULL DISCLOSURE: A number of units of this product have, at some time, been supplied to KIWIreviews by Scholastic (NZ) or their agents for the purposes of unbiased, independent reviews. No fee was accepted by KIWIreviews or the reviewers themselves - these are genuine, unpaid consumer reviews.
Available:
At Bookstores

Cooking is becoming quite the fashionable thing these days, and you only have to watch an episode of Junior Masterchef to realise that there are a lot of kids out there who have amazing culinary ability! Nic Brockelbank is one of these,
and he shares some of his favourite recipes in this book.

Nicholas Brockelbank is a truly amazing ten-year-old. He is an award-winning cook and he lives with Muscular Dystrophy. For the past few years Nic has been making and selling his own cookbooks and artwork via his website (www.nicocool.com

I picked up a copy of Nic's Cookbook recently with some birthday vouchers I had. At $10 this is a great little cookbook. I love that part of the proceeds are going to charity as well. It made it a very easy decision to part with $10. I even went and bought a few more copies since to give away as gifts. This is written by an incredibly talented 10 year old boy. And like many cookbooks it is broken into sections. So if you wanted, you or the children of the house could cook a three course meal for the family.

I like this idea because its an important skill for every child to master. Food prep and safety, making things from scratch and all the science and math involved in the cooking or baking process. Food is so educational! Looking through the book made my mouth water. The photos are really professional and the plating and food presentation is great. I loved the contents page and the difficulty rating used as well. Its really cool to see Nic in the photos doing the prep work and using all the tools. It means my daughters can look at that and know, hey that's a kid like me. And also if he can do it, I can too.

The page is set out well, with a list of equipment needed for each recipe. This was really good for me, because then I could get everything out needed before starting the recipe. The ingredients list graphic looked like a shopping list, which was neat. I liked all the hints and tips along the way and the how-to's were useful too. I did find the measurements difficult at times, but thats because I'm a cups girl for almost everything except butter which I only do in grams. I made the Spanish omelette this morning for fun. I didnt have all the ingredients but I was able to swap onions out for garlic and I added some kumara slices to the potato as well. The results were delicious! So thank you Nic for a great book that is definitely going to get a work out in my house.

Do you know a child who loves to cook? Perhaps they are dreaming of being a chef one day...then this is the perfect xmas gift for them, and at just $10.00 you definitely can not go wrong, and what's more $5.00 of that is donated to the Muscular Dystrophy Association.
ADMIN NOTE: To clarify, Nic is donating 50% of the ROYALTIES to the charity, not 50% of the the cover price.

I purchased Nic's cookbook from Mighty Ape as my 12 yr old son longs to be a chef, but not only that I was super impressed by the fact this 10 yr old boy had compiled recipe books and was then selling hand written copies on his website for $5.00 each and then donating a percentage of that to 3 different charities. That is just so awesome!

My cookbook arrived in a really timely fashion and we couldn't wait to get started. Its a simple book with just 13 recipes, but they are great recipes and enough to put on a dinner party or two if you wanted. Even though there is only a small selection, they are the type of recipe you can make over and over again without getting sick of it. The pages are all nicely laid out with nice colours, great photos and easy/simple instructions. Older kids will have no trouble following the recipes alone and younger kids will be just as fine with an adult at their side to help out when needed.

We tried the chocolate slice first up, but slightly adapted as my kids often have an aversion to fruit etc in their baking, so they adapted the recipe just slightly, swapping the fruit etc for lollies and nuts instead. This did not detract from the original recipe and it still came out perfectly fine. What a nice, simple, easy to make yet super yummy slice. Well done Nic on this one as it is a major hit in our house and has been made many times since.

This is definitely one of the best cookbooks I have owned in terms of simplicity, ease of use and likability I am really glad I purchased it and do hope there will be more books in the future.

Nic's Cookbook arrived on a very wintery Saturday so Miss Four, Miss Five and I headed straight to the supermarket to get our ingredients. This was made easy by the book fitting in my bag and each recipe having a very easy to read ingredients list so we could easily see what we needed to buy.

We decided to make sushi and chocolate slice for pudding.

Firstly the photography and visual presentation of this book is stunning. It really is a lovely book to use. Pretty much every photo shows Nic preparing a step in his recipe so it is easy for children to follow the steps and see how things should look.

Each recipe has lots of tips from Nic and suggestions for substitutions i.e. rice instead of pasta. Nic also advises when his mum helps him out as well. There are only 13 recipes in this book but they are all easily achievable for a child and are all recipes that children would want to prepare and eat themselves.

We started with our sushi and then made the chocolate slice whilst the rice was cooking.

Miss Five LOVES sushi and I hadn't realised just how easy it was to make. The only thing I would suggest to Nic is that it would be helpful to head the numbered steps with "what to do" or "instructions" . Miss Five got very, very cross when I said to her "follow the instructions" and she said "but it doesn't say any instructions". Things were a bit heated until I looked at the page and understood what she meant!!

We improvised with our sushi and all made our own sushi rolls with ingredients we liked using leftover chicken instead of salmon. This recipe is a huge hit and we think we will regularly make sushi on a Saturday night now. So thanks Nic as you have saved us loads as making sushi is so cheap compared to buying it!

The chocolate slice was also a huge success (same issue for Miss Five with no heading for the steps, as in all the recipes). We omitted the ginger. There was no way this was going to last two weeks in our fridge though Nic! I will probably be eating the last few pieces tonight! Yummy.

We are already planning to cook some of the other recipes and I think this will be a well used little book.

It is really obvious reading this that Nic really does love to cook and I hope that he publishes more books in the future. Thanks very much Nic. This is a fantastic achievement and really inspirational for my girls who were really impressed at a ten year old having his own cookbook. We all love this book and I think it is a great addition to any household with littlies.

I love cooking with my kids so when I was offered a kid's cookbook to review I leapt at the chance. While browsing and using this book I had to keep reminding myself that this was written by a ten year old. I am sure there was a lot of adult input that went into polishing it ready for publication.

The book contains just 13 recipes but it is one of the few recipe books I've looked through that I plan on making at least half of them. There is a good balance of sweet and savoury dishes including some with an Asian flavour.

So far we have attempted two recipes, Mum's savouries and raspberry lamingtons. I loved how the recipes were split into equipment, ingredients and instructions. This made them easy to follow. There were also handy hints and facts that taught me new things.

The savouries were very basic and simple. I could see lots of ways I could adapt the recipe. For my first attempt I followed the recipe and was very pleased with the results.

Making lamingtons was on my culinary bucket-list. I had never made them before and was surprised at how easy they were and how few ingredients the recipe used. I would have written the instructions slightly differently if it had been me because while I was waiting for the jelly to thicken and I could have been preparing the rest of the lamington. I will be making them again as they were a hit with the whole family.

If my ten year old had written this book I would be very proud especially as he and Scholastic are donating half the royalties to the Muscular Dystrophy Association. It would make a great gift for a child combined with an apron, spatula or other cooking equipment.

Now known as the Dragon Riders, Rip and Mei are stuck in a land with bandit bullies, spying firebugs and warring dragon clans - while being followed everywhere by a grumpy dragon who owes them a ... more...