« You're Not Listening: What You're Missing and Why it Matters review

ProdID: 8535 - A Maori Phrase A Day
Written by Hemi Kelly 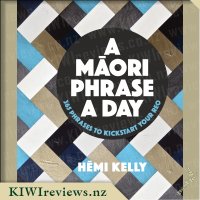 Disclosure StatementFULL DISCLOSURE: A number of units of this product have, at some time, been supplied to KIWIreviews by Penguin Random House or their agents for the purposes of unbiased, independent reviews. No fee was accepted by KIWIreviews or the reviewers themselves - these are genuine, unpaid consumer reviews.
Available:
January 2020

A Maori Phrase A Day offers a fun and easy entry into the Maori language. Through its 365 phrases, you will learn the following:

Presenting the most common, relevant and useful phrases today, A Maori Phrase A Day is the perfect way to kickstart your te reo journey!

I had fun trying this new publication out on my friends and family. They represent all stages of language fluency, ranging from almost no reo to completely bilingual, so it was interesting to find what different people had to say. There was also a variety of responses about the format of the book, which appealed to most but was criticised by a couple. However, you can't expect 100% agreement; I thought the positives outweighed the negatives by far.

First, a little about the format. It is a good size for travelling - chubby but compact so it will fit into most bags and is easy to read on a plane trip without elbowing the person in the next seat. I can vouch for that! It features large print which is useful if you are visually challenged or trying to read it in a low light (as during take-off). The paper itself is of excellent quality - environmentally produced but without the problems sometimes associated with "eco-friendly" products; the pages are strong enough to withstand normal wear and tear, and they survived the ultimate highlighter test. (It is common for people to emphasize a word or phrase in a book like this; I was delighted to find that my bright yellow highlighter did not bleed through to the other side of the page.)

The content is well set out; the target phrase appears in large bold print with a smaller English translation beneath it (also bold). A solid circle divides the phrase and definition from other relevant information such as the origin of the phrase, other ways to use it, and related vocabulary. At no times is there information overload to overwhelm the reader; I found these inclusions very interesting and admit to learning a few new expressions in the process. And there was also the acknowledgement of regional variations; for example, I grew up referring to the whareiti whereas most of the people where I now live call it the wharepaku - something I found really confusing until I realised that both words mean the same thing. Both words are listed here.

The more fluent speakers were enthusiastic about the book and said they would use it both for interest and also to help out other family members, especially the older ones who wanted to improve their reo painlessly and without the embarrassment of having to admit that they were not as knowledgeable as everyone assumed they were. The introductions were especially appreciated; the pronunciation guide was largely redundant for them, but they liked having the information on time, dates and seasons listed in the one place.

The most useful feedback was from a woman who has recently returned to New Zealand from Melbourne, where she has spent most of her life. Her family is Kai Tahu but none of them speak Maori at all (except for her father, who has a little reo). She is now keen to explore her heritage and of course than includes learning the language. I spent some time with her looking through the book and her impressions were informative and quite different from those of the others who had checked it out.

Her first comment was that she loved the clarity and the way each page was set out. Unlike the rest, she found the pronunciation section of the introduction quite useful and said she would certainly refer to it. The idea of arranging phrases by category was also a plus for her - she said she might leave a double page open each day somewhere where she would see it regularly in passing. That way, she would repeat the two new phrases several times and hopefully build up her knowledge. It is not necessary to read the book sequentially so she would pick and choose with the aim of eventually mastering everything.

However, she did say that she would like to see a few more illustrations here and there. While colour illustrations would be attractive, they could make the cost of the book too high - but line drawings would be ok, possibly little cartoons showing the gist of the phrase through humorous representation. She is a visual person who likes to reinforce her learning with graphics, and said this would help her to remember the content.

Another comment was that most of the phrases appear to be aimed at young people rather than adults. While this was not necessarily a drawback, she said there could be a little more adult content. I assured her that there were sections on going to a bar and relationships, so it was not all directed at the young! However, she thought there could have been more aimed at older people given that (in her opinion) most of those using the book would be grown-ups like herself rather than youngsters who would be more likely to learn at school.

My own opinion was positive. The only item I would like to have seen included is a glossary containing all the Maori words used in the book, and a reference to the page number(s) where they could be located. Dictionaries and word lists are available, but it is most useful to have this sort of information all included in the one volume. The font for this section could be much smaller than that used in the rest of the book as it would be used to reference only, not for regular drilling, so it need not take up much space. But even without these improvements, everyone I showed it to expressed interest in getting a copy for themselves!

In her latest story, Kuwi the kiwi attempts to find a moment of peace and quiet in the chaos of parenthood. But everywhere she turns, the volume just gets louder. Tap-dancing tomtits, karate-kicking kokako, and other noisy native friends join in the rowdy fun until Kuwi can't take it any more.

Adults and children alike will laugh at the humorous storyline and the quirky illustrations. The story also offers a heartwarming yet ... more...