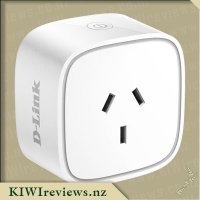 Disclosure StatementFULL DISCLOSURE: A number of units of this product have, at some time, been supplied to KIWIreviews by the company for the purposes of unbiased, independent reviews. No fee was accepted by KIWIreviews or the reviewers themselves - these are genuine, unpaid consumer reviews.
Available:
via online store and at selected retail outlets

The DSP-W118 mydlink Mini Wi-Fi Smart Plug not only enables users to control any attached electrical appliance in the home, but can also accept schedules that turn your TV off when you're asleep, power on your coffeemaker before you wake up, or automatically turn on your living room lamp while you're on holiday. You simply use D-Link's clever and free mydlink app that works with iPhone, iPad, and Android devices to manage your appliances via the new smart plug from your mobile device while on the go.

Key features of the DSP-W118 Mini Wi-Fi Smart Plug
•  Works with your existing Wi-Fi, so no hub required.
•  Slim design does not obstruct other AC outlets
•  Works with the Google Assistant, Alexa, and IFTTT
•  Works with the mydlink app and other mydlink ecosystem products
•  Over-the-air firmware upgrades
•  Outlet on/off, schedule and timer controls

Every now and then I travel away for a few days, sometimes longer, and the one worry I always have is the security of my house. While I can't stop some idiot from breaking a window or kicking down a door, I can at least give them the idea that I am still home... still, analogue timers are too easily spotted by their fixed schedules. However, I got to try a remote smart-plug a while ago and it was quite good, if a little difficult to set up, and it became an issue trying to get it to work properly when I changed my wifi hardware to a mesh-network kit from another company. I basically gave up on it and stopped using it. So I wasn't really holding out much hope when this unit arrived. Oh ye of little faith...

This is a very compact unit, and while it's not always going to be suitable for use in multiboards - some boards pack the sockets far too close together for my liking - this one looked as though it was going to fit into the board I have by the light I want to control... so I gave it a go. Joy of joys, not only did it fit and leave more than enough room for the other plugs, it proved to be super-simple to set up, and control through the mydlink app.

Setup was a breeze - plug it in, load the app, click "Add Device" and follow the walk-through. While some devices I have tried in the past have been a nightmare to get sorted on first install, this one nearly walked itself through the steps, and within a couple of minutes, I was able to toggle the unit with the tap of a button, turning the light one and off with ease. One of the things I noted early on was the remarkably small delay between click and action - the previous smartplug I had - from another company I should add - had a very long and noticable delay when manually activated - up to 10 seconds. This was less than a second, so was a huge improvement.

The next thing was to integrate it with IFTTT - I don't use Google Assistant or Alexa devices, so this was my only option, but one I have used for years, almost from the day it was first released. Because of that experience, I am very comfortable 'writing' rules and situational logic for it. Now, because I have a range of cameras from D-Link that also support IFTTT, a couple of which 'watch' the main potential entry points to the property and the house itself, having this switch activate and turn on the lights when they detect motion was quite easy for me, but I think it wouldn't take much for a novice to also get a few basic stimulus-response rules set up as well.

To add some randomness that isn't linked to a potential intruder, I also linked it to a small IFTTT-enabled motion sensor that I have near the cat flap, so the light will also turn on when the cat walks in or out, and will count down a random time interval then switch off again. My neighbours must have thought I was crazy, sitting at the end of the driveway on a comfy chair, watching how the light popped on and off at irregular, unpredictable intervals, exactly as a person would do if they were wandering around the house doing whatever they do.

Because of how good this was, I got a second one and hooked it up to another light in another part of the house, gave it a similar set of rules but, because the cat never seems to go into that section of the house (and I only have one motion sensor) I linked in a small Arduino-based device I have been playing with that has only one function - to generate random integers between 1 and 10, once per second. If the number 6 pops up, the device sends a command through the network to my home PC which then sends a toggle command via IFTTT to that 2nd switch, turning the light on or off as required. When paired with the cameras and a slight extra delay factor, someone entering the property sees the dining room light up, then a few seconds later the lounge lights up too, as though someone was walking around to investigate. Enough to give a foolhardy criminal pause for thought, one would hope. Taking into account that the camera at the front door has a microphone and speaker, it is easy enough to convince someone with nefarious intent that the house is occupied, and not a good target.

Now I will admit, this is a lot more advanced than most people would even bother with, but I am a geek and doing stuff like this gives me a real kick. Don't let my OTT setup put you off - this was a proof-of-concept, and a regular user won't need to do much more than install the unit, plug in their chosen device, and control it from their phone from anywhere in the world. What power we have nowadays!

Overall, I was greatly impressed, and have plans now to go wildly OTT by getting more of these and hooking up some more devices - lights for sure, but also maybe a radio and possibly a TV so that the scope of 'action' is wider, and even less predictable. This device is a godsend, and I look forward to seeing more devices coming out that will connect into this system, providing more security, but also automating some of the daily routine - such as lighting up during the early hours of Winter mornings, so I don't have to crawl out of bed in the darkness before heading off to work.

Fast Solar Charging with Premium Solar Panels:
Its highly effective solar absorption and transformation promote the full charging in about 25 hours to get full charge. The solar charging can be made as an effective and ... more...