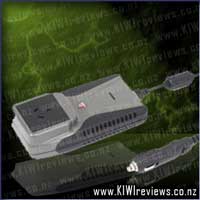 Disclosure StatementFULL DISCLOSURE: A number of units of this product have, at some time, been supplied to KIWIreviews by Targus or their agents for the purposes of unbiased, independent reviews. No fee was accepted by KIWIreviews or the reviewers themselves - these are genuine, unpaid consumer reviews.

The Targus 150W Auto/Air Power Inverter - Slimline Style is designed for the mobile professional or recreational user. It provides a power source for most electrical devices in RVs, cars, boats or aeroplanes. It is designed to conveniently fit into most standard cup holders.

Simply plug the inverter into the cigarette lighter plug and power or charge up to three devices including notebooks, mobile phones, PDAs, video consoles and many others. The APV14AU can deliver 150W of continuous and up to 200W of peak power.

It is safe to use and features over-current, over-temperature and surge protection. The APV14AU is targeted for mobile professionals or recreational users looking for a power source that can be used conveniently in their vehicle or inflight.

Why oh why didn't I get something like this a long time ago?!

The number of times I have been driving on a long trip and the portable CD player battery pack has died and I have forgotten (yet again) to pack the cigarette-lighter adapter, or the cellphone has run out of juice (and I don't have a ciggy adapter for that anyways)... it's so frustrating needing, or wanting, to use something that has a flat battery. So, Targus to the rescue with this stylish, compact unit.

Small and discretely styled, this is a sturdy unit despite it's looks. Solid construction, rubberised grips, strong cables with reinforced mounts where it meets plugs and chassis... this one has withstood a few dozen accidental bootings, a couple of falls off the dashboard, and even a good solid thump as it fell off the roof, as I juggled my armload of gear while hunting for keys, and onto concrete... 1 small ding, a couple of scratches, but otherwise still fully functional.

What really tells me how good it is, is how well I performed where other units couldn't... you see, we had some 'charging' issues with a new mp3 player where the laptop just didn't have enough grunt to charge it if the battery fell too low... but slapping the unit into the USB charging slot on this inverter, and it was sucking electrons like they were a chocolate thickshake. Beautiful! I also charged the laptop's wireless mouse, my own mp3 player, and even ran a USB-powered LED torch off it! As for the 3-pin socket, well, running a laptop was possible, but I did notice it wasn't running at top voltage, meaning a slight downgrade in performance, but the mechanic's light (You know the ones... a normal lightbulb in a plastic/wire cage) ran just fine, and I was able to recharge my 2.5 million candle-power spotlight off it just fine on a short drive from Palmerston North up to Waiouru for a spot of nocturnal snowball fighting.

My only slight niggle is that the third charging port requires the purchase of an optional cable... I am not 100% sure if the cable has any special hardware, or if it's just a cable... so I can't really make an assessment of it's value to this unit. At present, it's a bit like an appendix... there, could be useful, but most of the time just something you scratch your head and try to figure out if you could afford to do without it.

Overall, I was highly impressed with this. I took it to a sparky buddy who pushed volts through it every which way he could think off, all the safety features worked flawlessly, and the power management features impressed him even more than they did me... probably because he understood the technicalities, whereas I am but a humble end-user of such things. So long as it works, I don't break the ju-ju by asking how.

If you plan to drive, or fly in a suitably equiped plane, and need to use your laptop and don't want to drain the battery, or if the battery is running low, then you should have one of these tucked into your carrybag. I keep mine in my car basically, and it has been so helpful a number of times, I am sorely tempted to buy a second one to keep with the laptop!

The Freeloader Classic is the new star of the solar mobile charging world. Sleek and robust it contains the most cutting edge electronics capable of powering the world's most popular devices including the Apple iPhone and iPad.