« What's the Difference: 40+ Pairs of the Seemingly Similar review 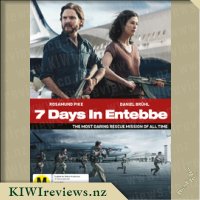 Disclosure StatementFULL DISCLOSURE: A number of units of this product have, at some time, been supplied to KIWIreviews by Universal Pictures NZ or their agents for the purposes of unbiased, independent reviews. No fee was accepted by KIWIreviews or the reviewers themselves - these are genuine, unpaid consumer reviews.
Available:
September 2018

If you are planning to watch this movie expecting a full-on action flick, you are going to be disappointed! I had no idea what I was in for when I started watching it, apart from the fact that it dealt with the Entebbe hostage crisis which I was already familiar with. It quickly transpired that this was a drama rather than just another shoot-'em-up hijacking film - the interpersonal relationships of the various factions, the political backstory, the human condition, all were vital parts of the story. The director, Jose Padilha, had chosen to use the added dimension of the arts (music and dance) to enhance and provide a commentary on the story - thus producing a movie more in the European arthouse style than in that of the mainstream cinema.

Having said that, I think it is important that anyone who is not familiar with the events covered should read up on the historical background before watching. Although the movie is based on fact, it would be difficult for anyone to follow if they were not aware of what really happened. Some of the scene changes might be confusing if the viewer did not know what was going on. The basic premise is straightforward (terrorists capture a French plane bound for Paris out of Tel Aviv, and force it to land in Uganda. The Israeli government then has to sort out the situation.) However, the plot sequence is not always logical, so it would be easy to get confused if the viewer did not keep the overview in mind.

I thought the cast was extremely well chosen. In particular, Nonso Anozie delivered an impressive performance as Idi Amin Dada, the ruler of Uganda. He was so impeccably evil he made me shudder; he even looked the part. (His megalomania reminded me of a certain contemporary politician!) Although he had a comparatively small role in the film, he made a lasting impression. I also liked Lior Ashkenazi's portrayal of Yitzhak Rabin, and Eddie Marsan's Shimon Peres. The rivalries within the Israeli government added an intriguing layer to the film plot, emphasising that there are always factions within factions.

The symbolic music and dance performances which recur throughout the movie are just amazing. The Batsheva Dance Company's presentation echoes the film plot through movement - much of it stylised, but easy to follow nonetheless. The longest segment is interlaced with the scene of the Israeli storming of the airport to free the last hostages. The music is a Hebrew rendition of Echad Mi Yodea - a Passover song which dovetails perfectly with the onscreen action. Passover is a time of celebrating freedom, which is exactly what is happening for the hostages. Not only do the lyrics show this release, the dancers ritually remove their costumes to symbolise shedding what is weighing them down.

At times the drama merges almost into documentary (although, as is to be expected, there is a considerable application of poetic licence involved). At the end of the movie there is archival footage of the real homecoming of the released hostages, interspersed with the dance performance and the film sequence. This is probably intended to prove that the hijacking and rescue really did happen, but is a tad confusing. I found the whole ending somewhat rushed: there was room here for more detailed unpacking of what had just occurred. Entebbe was one of the major historical events of the 20th century so another five minutes at the end might have been useful.

Did I enjoy the movie? Most certainly, despite the plethora of subplots and the occasional moralising tone of the narrative. What saves it is the soundtrack and the dance performances which inform the action and link the otherwise episodic segments into a unit. And if it is not historically totally accurate in every detail, and if the director's take on it is personal rather than rigidly adhering to the facts, then it needs to be acknowledged that this is an art film and entitled to present the world from its own perspective. I have seen it twice now and I am looking forward to seeing it again.