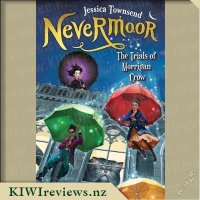 Morrigan Crow is cursed. Born on an unlucky day, she is blamed for all local misfortunes, from hailstorms to heart attacks - and, worst of all, the curse means that Morrigan is doomed to die at midnight on Eventide. But as Morrigan awaits her fate, a strange and remarkable man named Jupiter North appears.

Chased by black-smoke hounds and shadowy hunters on horseback, he whisks her away into the safety of a secret, magical city called Nevermoor. It's there that Morrigan discovers Jupiter has chosen her to contend for a place in the city's most prestigious organisation: the Wundrous Society. In order to join, she must compete in four difficult and dangerous trials against hundreds of other children, each boasting an extraordinary talent that sets them apart. Except for Morrigan, who doesn't seem to have any special talent at all.

To stay in the safety of Nevermoor for good, Morrigan will need to find a way to pass the tests - or she'll have to leave the city to confront her deadly fate.

There was so much hype around this book when it came out and I heard so much about it as my mums work hosted a book launch for Nevermoor, I have an Nevermoor umbrella thanks to it, but I've only just managed to sit down with it to give it a read and I must say that I wished I'd read it sooner, it's such fun. Morrigan is about to turn eleven but it's not something to be celebrated, for her it means death, but things don't happen as expected and she finds herself whisked away by the eccentric Jupiter North, owner of a gorgeous, magical hotel in the land of Nevermoor and her new Patron. Along the way she makes friends with Hawthorne and meets Jupiters nephew Jack.

The story follows Morrigan as she leaves behind the life or death as was the case, that she thought she was headed for and the new one that offers her so much but there's great risk in getting there, her spot in a happy life isn't guaranteed. Because this world of Nevermoor is so new to Morrigan, it is perfect for us as the reader because we get to learn as she does but just as she is left with many questions so are we, but it didn't make me feel impatient or annoyed at a lack of answers as some books have. The characters are well developed and you do get introduced to quite a few, ones you know will be background characters and some that may well become more key as the series continues.

With this book having sold really well and so far set to be made into a film and the second instalment to come out this year, this is a fun, well written, enthralling tale of a young girl finding life, adventure and a whole lot of danger and I can't wait to see what happens next.

An egg in the garden. An egg on the path.
An egg in a shoe. An egg in the bath.
"Cluck, cluck! Wonderful me!
Cackle, cackle! My eggs are free!"

Young Nelson despairs that his hen won't lay her eggs in his henhouse, so decides to lock her in until she lays in the nest. But Omeletta is a stubborn creature and refuses to lay any eggs at all until she is freed. Children will laugh out loud at the hilarious antics of ... more...