Disclosure StatementFULL DISCLOSURE: A number of units of this product have, at some time, been supplied to KIWIreviews by Duckling Publishing or their agents for the purposes of unbiased, independent reviews. No fee was accepted by KIWIreviews or the reviewers themselves - these are genuine, unpaid consumer reviews.
Available:
May 2020

Alphabet Resort is the fourth in the Elastic Island Adventures fantasy series set in the South Pacific and featuring Kiri, Jed, and the twins Emma and Ethan.

The children discover an "elastic" island that sends them pinging across the ocean to a variety of destinations. They are thrilled to be going to the wedding of King Shiny and Princess Topaz.

Love is in the air, especially when they encounter Wombo the Wombat, a bachelor looking for love, and decide to help him. But then Princess Topaz is kidnapped, and everyone begins a frantic hunt to find her. Will they find her in time for the wedding, and will Wombo the Wombat succeed in finding love? 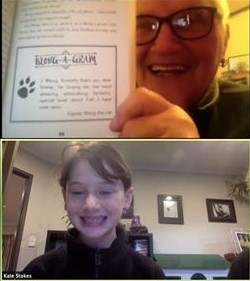 Miss Eight and I had been looking forward to reviewing this book for so long - she was already a firm fan of the series and could not wait to see what the four children and her personal favourite, Blong the Cat, would be up to this time round. It appeared our review might be delayed because the country was in lockdown due to the pandemic, but we got round that one by reading our daily chapter via ZOOM link. It meant some tweaking of our usual reviewing process since we usually take turns to read the chapters, but we agreed that I would keep the book and do all the readings except for the BLONG-A-GRAMS. These are in large print so I was able to reverse the book and hold it up to the screen so she could read those bits to me! There were 18 chapters but some were fairly short so we were able to double up on a few and complete the reading in exactly 13 sessions. And next time I see her I will give her the book to keep so she can re-read it on her own.

There is a nice sense of familiarity when a book is part of a series. The main characters are like special friends; their personalities are already known, so you can go straight to the story proper. Interestingly, Miss Eight only now queried why their means of transport was called an elastic island so this involved my trying to explain it to her using a rubber band and a wad of paper and attempting to demonstrate via the computer screen. She then got her own rubber band and tried it. So much for a hands-on physics lesson! She understands now why Blong was so nervous about the whole process.

Near the beginning of the book is a list of the 26 authors who have given their names to the various buildings in Alphabet Resort. I was amazed at how intrigued Miss Eight was by the listing. I had thought she would skim over those two pages after reading the first two entries, but I had to read the entire list to her so she could comment on each entry. She was familiar with around 50% of the authors, a lot more than I had expected. Of course, some of them were not "real" authors but that did not matter to her. She loved the whole idea and said she hoped one day someone would name something after her too!

The square poos which feature quite early on were also a source of great interest. Every time the words "poo" or "poop" came up, she dissolved into giggles and we had to suspend the reading while she recovered. It is amazing just how hysterically funny bodily functions are when you are a child. I had thought that she would have grown out of this by the age of eight, but I thought wrong - things she found hilarious at the age of three are just as funny five years on. We actually had to stop and check whether cube-shaped poop is a real phenomenon, and were amazed to learn that it is.

Meeting many of the characters that feature in the first three books of the series was another bonus. The quokkas (complete with Baby Joey who emerges, waves his orange rattle then disappears back into his mother's pouch), the knockulous pair, the frivals, the giants, all Mr Jollybowler's parrots, Salmon the Sea Dragon, and even Chief Montegrow all play a part. It is a given that Princess Topaz, King Shiny, Princess Makana and the wombats have to be there as it is their story!

Both Miss Eight and I are looking forward to the next book in the series - especially as it is to be about her personal favourite character, Blong the Cat. Hopefully some of the other familiar characters will be back as well - but of course it will be interesting to meet some new ones as well.

Score: - pending -
Product reviews for listing 1064: The Language of Stones 3: Whitemantle (The Third Coming of Arthur) -  Written by Robert Carter

THE FIFTEENTH CENTURY AS IT SHOULD HAVE BEEN...

As civil war tears the Realm apart, the sorceror Maskull's plans to bring about a catastrophe that will rob the world of magic are coming to fruition. The wizard Gwydion knows that the only hope for the future lies with Willand, the young man he believes to be the reincarnation of King Arthur.

But Will is beset with doubts. He is being stalked by the Dark Child, the twin ... more...