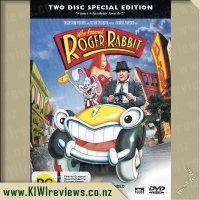 It's 1947 Hollywood and Eddie Valiant (Bob Hoskins), a down-on-his-luck detective, is hired to find proof that Marvin Acme, gag factory mogul and owner of Toontown, is playing hanky-panky with femme-fatale Jessica Rabbit, wife of Maroon Cartoon superstar, Roger Rabbit. When Acme is found murdered, all fingers point to Roger, and the sinister, power-hungry Judge Doom (Christopher Lloyd) is on a mission to bring Roger to justice.

Roger begs the Toon-hating Valiant to find the real evildoer and the plot thickens as Eddie uncovers scandal after scandal and realizes the very existence of Toontown is at stake! A landmark in special effects, Robert Zemeckis' ingenious, hilarious Who Framed Roger Rabbit? is an Acme-guaranteed classic!

Imagine a world where cartoon characters are as much actors and thus real as any flesh and blood human... That's what we have here. All the Acme cartoon characters are real and interact with people as people interact with people. Roger is in despair, thinking his marriage is going down the drain and Eddie ends up being asked to find proof of an affair, however when a man is murdered Roger becomes top suspect but before they know it they discover a much darker plan being set in motion. Keep an eye out during this movie for various cartoon characters such as Porky the Pig and Betty Bop.

There are quite a few moments to laugh at in this movie, though a good deal are adult centric (so I would wait until the kids are a bit older before they watch it, certainly older than I as when seeing it first) and a couple of the female cartoon characters are rather well endowed and show a lot of cleavage. I think my favorite part of this would have to be Eddie and how much he time he spends with the cartoon characters and has to put up with all of their jokes despite hating it. I have never liked the end scene with the bad guy, even today I still don't like it, but perhaps that is just ingrained in me due to watching it when younger.

A classic movie, not one for the kids, but still a classic.