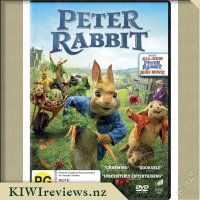 Disclosure StatementFULL DISCLOSURE: A number of units of this product have, at some time, been supplied to KIWIreviews by Sony Pictures Home Entertainment or their agents for the purposes of unbiased, independent reviews. No fee was accepted by KIWIreviews or the reviewers themselves - these are genuine, unpaid consumer reviews.
Available:
July 2018

I grew up reading the various Peter Rabbit books through my childhood so I was interested in what a film adaptation might bring to the table.

This is one of those films of recent to hit the headlines for the wrong reasons, in this case the rabbits take advantage of Mr McGregors allergy buy shooting some of the particular fruit into his mouth, causing a negative reaction. I knew we could expect lots of fighting and violence, after all, the books have the farmer constantly trying to rid his garden of Peter and family but I did find a couple of scenes were still a little over the top for this family 'friendly' film. The film pretty much follows on from the books, all the same animals, the only difference is that we get McGregors grand-nephew as the anti-rabbit character and Bea as his potential love interest and friend to the animals.

My kids have already seen this film about four times each thanks to their Granddad having a copy of it, I've only seen it twice and must say that it was a movie that improved with a second viewing, I enjoyed it far more than I had the first time. The voice actors were good but I must be honest and say that the only voice I recognised was that of Peter Rabbit, the rest were pretty much generic and I couldn't even keep it in my head which sister was which... I did thoroughly enjoy the rooster though and his small part in the film, had me laughing each time. The film ends nicely, working things out for everyone and I love how it turns into an animation style similar to that of the original books, I thought that was a lovely homage to the original stories.

The DVDs extra features gives us a short clip featuring the three sisters and a small tale of their relationship with each other, sweet enough but nothing amazing. There's a dance along to the main song which my nine year old really likes, getting up to try and copy the moves, which are nice and simple ones. Then there is the obligatory behind the scenes programme which is a good way to while away a few minutes if you're keen for a bit more info on the film. Lastly, it has a previews option, but there is in fact, only one preview, which is really only of worth if the kids want to watch and rewatch it.

Overall, this isn't too bad a film, I don't think it's in the top ten to come out but it's a fun enough way to spend a couple of hours with the kids.