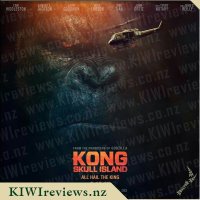 This film fully immerses audiences in the mysterious and dangerous home of the king of the apes as a team of explorers ventures deep inside the treacherous, primordial island.

Kong is as classic as classic comes, but no film has ever really been able to recreate the wow factor from those original films. CGI just doesn't match our expectations as the visual quality of film continues to increase. Kong: Skull Island is, however, a vast improvement in quality since Peter Jackson's attempt.

Set in the time period immediately post-Vietnam war, the entire film is shot with a vintage filter of sorts, giving an orange, dark, dingy, and grainy feel to the footage. The environments, vehicles and munitions used in the film also help with the overall dated feel of the film. An aspect that I did enjoy was the role of the photographer in capturing moments on film; despite the movie being in colour, the photos were black and white. A brilliant small thing that really brought that authenticity home.

Plot-wise, the film is rather lacking. There is an island, there is Kong, and chaos ensues. Most of the plot and back story are provided through John C. Reilly's character Marlow, who is the highlight of the film. Providing realism, but still imbibing optimism, Marlow straddles the fence line of insanity, and is the only character I get truly invested in. Samuel L. Jackson's role comes a close second, but he crosses the line a little too quickly, and loses my support quite easily.

There seems to be a contrast of ideals and ways of thinking between the majority military group, and majority civilian group. The military group are very much portrayed in a "follow orders", and "shoot first" mentality, while the civilian group very much have an "observe" and "protect" vibe going. This in itself would have been much more enjoyable a comparison if the groups had come across the same situations. Instead, we found the military group in a much more hostile situation that was only able to be solved through violence, bringing back the "if the only tool you have is a hammer, you treat everything as if it were a nail" school of thought.

The CGI was much improved, and Kong did look spectacular. The only real problem I found was the pure scale of the creatures. While awe inspiring, it leaves the human characters playing a negligible part in the film. Their size inhibits them from having any real effect on the proceedings, and renders their character traits rather moot (not that there were any strong actors in the film apart from John C Reilly and Samuel L. Jackson). In fact, they seem to have attempted to counter the size difference by adding more people to the cast. The end result is we have an undisclosed number of expendable people. The deaths lose meaning, and you don't empathise with anyone any more.

The monsters were inconsistent, in size, speed and strength, which was rather annoying. But in reality, I was here to see Kong fight. And I saw Kong fight. So it met expectations. I'd just love to have seen a better plot.

Bohemian Rhapsody is a foot-stomping celebration of Queen, their music and their extraordinary lead singer Freddie Mercury. Freddie defied stereotypes and shattered convention to become one of the most beloved entertainers on the planet. The film traces the meteoric rise of the band through their iconic songs and revolutionary sound. They reach unparalleled success, but ... more...