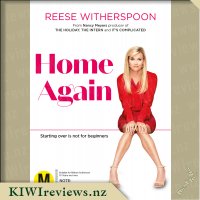 Disclosure StatementFULL DISCLOSURE: A number of units of this product have, at some time, been supplied to KIWIreviews by Universal Pictures NZ or their agents for the purposes of unbiased, independent reviews. No fee was accepted by KIWIreviews or the reviewers themselves - these are genuine, unpaid consumer reviews.
Available:
January 2018

Life for a single mom in Los Angeles takes an unexpected turn when she allows three young guys to move in with her.

Recently separated from her husband, Alice Kinney decides to start over by moving back to Los Angeles with her two daughters. While celebrating her 40th birthday, Alice meets Harry, George and Teddy, three young filmmakers who need a place to live.

Complications soon arise when she agrees to let the men stay in her guesthouse temporarily. As Alice develops a budding romance with Harry, her newfound happiness comes crashing down when her ex shows up with a suitcase in his hand.

A meltingly hot summers day, the kids entertained with a DIY pool and no energy to do anything but blob, so I decided to put this movie on to watch. I'd watched the trailer and while it didn't hook me it did interest me enough to give it a try. I like Reese Witherspoon and Candice Bergen, so settled down with a cold drink to see where it would take me. This has the basis of many a romantic comedy, girl splits from partner, inadvertently meets new guy, old guy comes back for her, fist fight ensues and emotions are put to the test.

We get a quick background to Alice's past and the family she comes from, though other than being a good reason behind her home and the whole Hollywood theme, didn't really seem important and could have been skipped. Alice gets a night off from being a solo mum and ends up inviting three blokes, along with her girlfriends, back to her house and though nothing happens at first, these young lads move in and change her life, as she does there's. We have two intertwining stories, Alice who is trying to start again after splitting from her husband and the three young lads who want their script turned into a film.

I did find that a lot of this felt rather rushed. Alice has only been separated from her husband for five months, and whilst people do get infatuated etc it does just seem like she's gotten over it all rather quickly and life is dandy. She deals with a bad business venture and even though she then deals with it, it felt rather lacklustre and unmonumental. Alice was an overall nice character and well acted but it seemed like there was moments that needed far more emotion than was written into the script. The young lads were fabulous and do a lot of character growth, but again, there was just something missing.

This film gets a happy ending which you always want in a romantic comedy, there just wasn't enough to this for me to watch it again but it was a nice way to while away an hour and a half.

When Tony Stark tries to jumpstart a dormant peacekeeping program, things go awry and Earth's Mightiest Heroes, including Iron Man, Captain America, Thor, The Incredible Hulk, Black Widow and Hawkeye, are put to the ultimate test as the fate of the planet hangs in the balance.

As the villainous Ultron emerges, it is up to The Avengers to stop him from enacting his terrible plans, and soon uneasy alliances and unexpected action pave the way for an epic and unique global adventure.