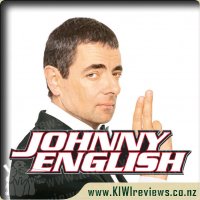 When her majesty's crown jewels are stolen by a conniving Frenchman, who also plans to steal the queen's throne, spy Johnny English, a bit unseasoned but intensely enthusiastic, is thrown onto the case.

Fast cars, high tech gadgets, top secret info--Johnny can hardly believe it. He may be in over his head, but his courage and dedication are unmatched - especially after he meets double agent Lorna Campbell and discovers that falling in love makes saving the nation even more exciting.

When I saw Johnny English come out, I must admit I was a bit sad. I'm a huge fan of Rowan Atkinson. He has a fantastic talent for comedic timing, delivery and is able to be repulsive or dashing with such ease. I loved him in Blackadder, and Not the Nine O'Clock News. Mr Bean was not my most favourite, but I accept that universally Mr Bean is terribly popular. On the back of that, Johnny English - of course!

English is the bumbling spy. This was released just after Austin Powers 2 and a few years before the reboot of Pink Panther and Get Smart, but its a similar thing. Idiotic spy paired beautiful and far more capable partner, let the games begin. The comedy in this is basic slapstick, and lots of "hide behind your pillow I can not believe he is doing this" shock-tactics. It did make me laugh and I did enjoy the film for what it was, though I still think that Atkinson can be more.

I did like the James Bond style touches to this film. The fast cars, the gadgets, and the girl of course. John Malkovich makes a great villain, and I loved watching his scenes. Natalie Imbruglia makes a passable double agent. Though I must admit she was a little forgettable.

He Knows No Fear. He Knows No Danger. He Knows Nothing. With a tagline like that... I was hooked and couldn't wait to see it, plus, I really like Rowan Atkinson and John Malkovich.

Johnny English is the worst spy there is, he is clumsy and always doing the wrong thing. When an accident happens and he is the last spy that there is, it falls on him to protect the crown jewels. When they are stolen he must prove his worth and make his superiors believe him when he works out who the mastermind is.

As one can expect from Rowan Atkinson there are plenty of laughs throughout this film, some subtle, some not so subtle, yet all are funny. You also know a movie does a great job when something they do with a song is all the you see when you play that song from them on (if you're curious and can't wait to see the movie then it's an ABBA song and Rowan Atkinson).

This is a really fun movie, it's a spoof, naturally, of the Bond series and other spy films, yet it is done so well that it easily sets itself apart from the crowd.

In another time, THE DARK CRYSTAL - a source of Balance and Truth in the Universe - was shattered, dividing the world into two factions: the wicked Skeksis and the peaceful Mystics. Now, as the convergence of the three suns approaches, the Crystal must be healed, or darkness will reign forever.