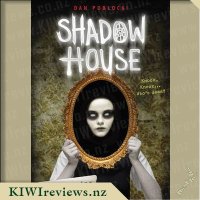 Some houses are more than just haunted... they're hungry.

Dash, Dylan, Poppy, Marcus, and Azumi don't know this at first. They each think they've been summoned to Shadow House for innocent reasons. But there's nothing innocent about Shadow House.

Something within its walls is wickedly wrong. Nothing-and nobody-can be trusted. Hallways move. Doors vanish. Ghosts appear. Children disappear. And the way out? That's disappeared, too...

Enter Shadow House... if you dare.

As soon as my eight year old daughter saw this book she was intrigued by it and even more so that it contained an App for a game that could be played. The cover held her fancy and she flipped it back and forth so that the hologram caught the light. She was dying to read it so I told her I would read it first and if I thought it was appropriate then she could read it afterwards. I found this was a little more advanced then the Goosebumps books and I am not quite sure she is ready to read it as some of the words could be a little over her head. It reminded me of the movie Thirteen Ghosts where the house kept adjusting itself and contained evil entities that wanted to kill the occupants - just on a much more child friendlier scale.

The chapters are nice and small and it moves at a steady pace. The pictures scattered through out the pages are vivid and haunting and the pages add influence to the story by having shadows around the borders and its written on grey paper which all adds volumes to the story. I found even though I was enjoying it, I found it did not capture my full attention at times, so I would have to put it down, but after a couple of minutes found the desire to know what would happen was too strong so I would pick it up and continue reading. I panned on leaving the last six chapters till that evening but could not do it and instead read the remaining of the book after the girls homework was done.

I have admit the little twist at the end blew me away and I feel so silly I did not pick up on it. All of the clues where planted right in front of you and the idea did not even occur to me. I found after I knew the truth I jumped back to the beginning and read parts of the story all over again and congratulate them on how clever they are.

Once I finished the book my daughter was jumping up and down asking if she could read it but I told her its a little above her reading level so she asked if she could play the game. I uploaded the game onto my tablet and said that I would play it first. Throughout the book there are symbols scattered through out the photos, but in all honesty you do not need to have the book. Instead you have to trace the key to open the next level. It is a 'pick a path' game and you find out the history of the 'special children' and delve into there past and find out secrets pertaining to Larkspur School. Only twelve levels long and only take about ten minutes per level. It includes pictures like from the book, except in some cases the pictures do actually move. Extremely simple except - read and then on occasions decide what to do. I did not see any problem with the game for my daughter, so allowed her to play it, although turns out she didn't read the stories instead just waited for the part where you guess what way to go - so really it was rather wasted on her.

Personally I enjoyed the book and the game and think they are a great combination. I am interested to see what develops for Dash and Dylan, to see if they all escape with their lives from the rest of the 'special' kids since they now know how to beat them. Also, I am extremely curious of the Shadow Man haunting the forest. I am still shocked I did not see the truth before it was revealed, just a great twist!

The first thing that crossed my mind when I started reading this book was that it reminded me of the opening to Charlie and the Chocolate Factory. The format is similar - a group of random children invited to gather in a particular place, summoned by a stranger they have never heard of before. But after the first four chapters, the story takes quite a different turn as it brings the five children together in a house none of them could ever have imagined possible.

I enjoyed the way something that started out as a rather mundane clone of another book quickly developed into a story of quite a different nature. I found it compelling reading, and ended up finishing it in one go. I like reading books in this way as the story remains fresh in your mind and develops smoothly. Often, when I have to put a book down part way through reading it, I find that I have forgotten something and then I have to go back and do another check. This is a book that gains momentum as the story unfolds so I was rapidly drawn in.

To give any more away would constitute a spoiler, but I can add that there is a downloadable app which complements the book. Having installed it, you then select a sigil (or magic symbol) according to where you are up to in the game. These sigils appear on the full-page graphics in the book itself, and must be done in order. If you try to skip a step, you are ordered to start again! Once you are into the game, a combination of text and graphics guides you to the next development in the story. Choices at each step are offered in the style of "Choose Your Own Adventure" so that there are many different outcomes to be explored. Unfortunately the app appears to run only in iOS 8.0 (or later) which means you need an iPhone, iPad or iPod touch.

Miss 16, an avid reader who often borrows young adult books that I am reviewing and gives me a teenage perspective on the content, was unable to read this one. She has an issue with her sight and because of the formatting of the text she was not able to see the pages well enough to be able to read them. (I sympathise since I have this problem too when I try to read text printed on a coloured page in a glossy magazine; it is even worse when the text is coloured as well.) This is a shame as I think she would have enjoyed the book despite its target audience being somewhat younger. It is something publishers might want to bear in mind when they are choosing an effective format. Had the border been dark but the printed area left white it might have been all right, but the pages were shaded from light in the middle to dark at the edges.

Apart from the unfortunate formatting of the text pages, I thought the overall appearance of the book was most attractive. It has an innovative cover which depicts a girl with a mirror overlay; this gives her two distinct appearances and sets the scene for what is to unfold in the course of the story. The full page graphics (which also feature the sigils) are beautifully done - they look like photographs that have then been manipulated just enough to resemble old print, which only adds to the spooky result. I look forward to the release of the second book in the series.

Find and use the features you need right away

What's new at the Office? A lot, and this book takes you through all the cool changes and enhancements so you can rev up and go. Find your way around the new interface, dress up your documents, create spreadsheets that actually make sense, give presentations that wow ... more...