Portrait of the Riviera review 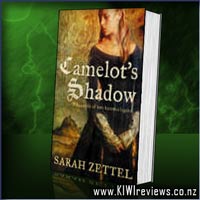 Disclosure StatementFULL DISCLOSURE: A number of units of this product have, at some time, been supplied to KIWIreviews by HarperCollins for the purposes of unbiased, independent reviews. No fee was accepted by KIWIreviews or the reviewers themselves - these are genuine, unpaid consumer reviews.
Available:
13-05-05

As Arthur fights to keep his kingdom, his heir is about to lose his heart.

When nineteen-year-old Lady Rhian discovers her father promised her at birth to a sorcerer in return for her mother's life, she runs away to join a convent. Determined to exact his payment, the sorcerer waylays her on the road, but is thwarted by a valiant knight. Sir Gawain gallantly offers to escort Rhian to Camelot, and Queen Guinevere's protection.

Gawain has taken a great risk in stopping to help Rhian - he must warn his uncle, King Arthur, of impending war. But when they are attacked by a band of Saxons, Rhian proves that her skills include more than tapestry and gossip - and Gawain is captivated as much by her bravery as by her beauty...

Like most people, I know of Camelot through stories and movies.
I know of King Arthur and Queen Guinevere, the round table and of course Lancelot...

While this story was called Camelot's Shadow, there was actually very little of the story based on the Camelot we all know.
This story focuses on one of the other knights, Gawain, and the Lady Rhian...

It is the story of Rhian's attempt to flee from the evil sorcerer that was promised her life in return for saving her mother during childbirth, and the resurgence of the Saxons, which Gawain must report to the King...
These two character's lives intertwine when Gawain rescues Rhian from the sorcerer and takes her under his wing in an attempt to save her from the fate that was ordained for her.
They fight together against the Saxons, they battle the growing attraction between them, and they learn that true love will conquer all during the course of the story - even evil sorcerers and tricky characters such as the Green Man...

This was a pleasant read, with enough of the known history of Camelot to tie all the pieces together, and a depth to the characters that made them real, they weren't just good or evil, they were human...
I look forward to reading Camelot's Honour at some stage.

The twentieth century was a time of runaway growth in human population, consumption and technology, all of which placed tremendous demands on earth, air and water - the very elements of life. The urgent question of the twenty first century is how, or whether this can continue.

In a Short History of Progress, a runaway best seller in his native Canada, Ronald Wright explains how our current predicament is as old as civilisation. ... more...