« Where Did All the Dinos Go? review 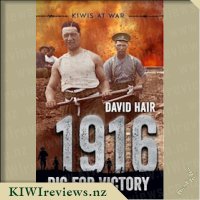 "As we Otago lads have only enough men for two squadrons, the General has decided that we are to be merged with the incoming Maori contingents to form a new battalion. Our new battalion will be 'Pioneers', doing behind-the-lines work: building barracks, railroads, roads and trenches. As you can imagine, Father, we're not happy - we want to fight, not dig holes."

When Leith NcArran signed up to fight in a war half a world away, little did he know that he and his fellow Dunedin Scots would end up shovelling dirt with Maori lads from home. Nor did he know that he'd become best mates with a young orphan named Tamati Baines, who is haunted by nightmares of steel serpents and blood-red butterflies - visions that might save them from a secret enemy - or get them both killed.

I have learnt over the years to always have something to read when a child is at an appointment as often an hour can turn into a bit longer and there is nothing worse than being bored.

I missed the first book in the series but I did manage to get the second book and really enjoyed reading it so I thought it would be great to carry on and see how things end. I hadnâ ™t thought about how the guys would be feeling while overseas fighting and who would have the jobs of digging and keeping things in order. This book is not always so easy to read especially since there was no guarantee that the soldiers would make it home.

The extras like the photos and the historic notes really helped me to realise just how difficult it would have been for these guys especially since they weren't happy with what they were asked to do and the racial tension would have been hard to deal with. I strongly believe that people should be judged on their actions and not skin colour. I managed to read this in a few hours but some parts almost made me cry.

I will be trying to find the first book and definitely keeping my eyes out for the last two books in this series. I feel that my boys are a bit too young to be reading this now but will keep this until they are older and can process the horror of war more easily.

Having read the previous two books in the 'Kiwis at War' series, I have been checking to see when '1916 Dig for Victory' was due out. '1914 Riding into War' and '1915 Wounds of War' were great reads and I was pretty sure that '1916 Dig for Victory' would be just as good. I was right! I am glad that I found the time to sit and enjoy it.

Each of the books in the series is written by a different author and therefore has its own flavour to it. I have read each of the books a year apart (when they were released), so I didn't notice the difference in style. It is surreal to think that the books are based on events that happened one hundred years ago. My 13.5 year old niece also enjoyed the previous books, so I know that she will want to borrow this book when I see her next. She read the previous books last year when she was 12. (She had a number of adults who had read the books around her who she could talk to about what she was reading if she needed to.) The book is aimed at young adults and is generally not suitable for preteens. The subject matter would frighten younger children, especially those with a good imagination.

The book showed a part of the war that I hadn't thought about before. It highlighted the relationships between Maori and Pakeha and the struggles they had in the process of learning to accept each other. The two main characters are Leith and Tamati and they are the driving force for the Maori and Pakeha to work together and accept each other. These two young men are believable heroes. Throughout the book, Leith and Tamati write letters home to family. These letters help develop the characters into real people with families and lives back in New Zealand. Something to note is that the pages with the letters written home are a little hard to read. The font is designed to look like handwriting and this, in addition to the grey background, makes it harder to read than the rest of the text. Perhaps this would have been better done with an outline around the 'letter', or the effect of lined paper to look like writing paper.

The story combines the horror and reality of war with a spy adventure that picks up momentum as the story unfolds. It was interesting to learn about the secret codes that they used in those days. This was something that intrigued me. The horrific smells and sights of war in the trenches are vividly described. Although it is hard to imagine without actually being there, I think that the author has done a very good job of painting a picture with words for the reader.

The glossary (including military terms and French words), timeline, photos and notes support the story as a well researched piece of fiction based on historical facts. Words such as 'diggers' and 'blighty' are also used within the context of the book and the origin of these words is explained. These were words that I had heard before in relation to the First World War but I didn't know where they came from.

I found that the story was riveting and I couldn't put it down once I started reading. I think that every New Zealander should read this book (and the others in the series). There are two more books in the 'Kiwis at War' series - 1917 and 1918. I will be searching for these books when they come out as well.