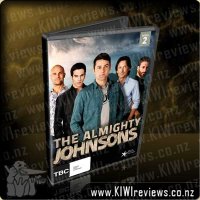 The Almighty Johnsons is a comedy-drama series about four brothers who just happen to be descended from Norse Gods. Each of the Johnson boys has his own God-like power; it's just that their powers aren't all that powerful.

The Johnsons are typical Kiwi blokes who don't much like to stand out from the crowd. And everyday gods have everyday struggles - striving to love stroppy women, overcoming sibling rivalry and fulfilling your god-like destiny, all the while still finding time to enjoy a few beers with your mates.

In series two, the quest to find Frigg continues. Along the way several new and exciting variations will be explored and the youngest brother, Axl, will find himself on a more personal quest: to become Odin, he must first 'become' Odin...

For those who didn't see it on TV, in this 3-DVD set we are again granted a peek into the lives of our modern-day deities. Gods and Goddesses are now working in co-operation (mostly) with the ideal outcome of Axl finding his destined beloved, Frigg, and the Norse Gods rising to full power. Sounds simple, when you have a brother who is the God of the Hunt and can find anything - once he has a scent to go on... a grandfather who is an oracle - when his libido isn't getting in the way of his prophetic powers... and a motley assortment of mortal and godly allies all working towards the same goal. But you know what... it's far from easy, especially when one of your brothers doesn't want to be a God any more, and your arch enemy is the God of Tricksters and seems to be one, or more, steps ahead of you at every turn.

I have to say, after the brief but intense burst of Loki from the last season, played to good effect by Shane Cortese, it was refreshing to see more of him this time around, even if the character he plays makes me wish I could strangle the smarmy jerk! (The character of Loki, that is.) What has changed, radically, is the amount of not-for-kids content in this series. One particular episode is, shall we say, rather explicit and depicts the most unlikely of couples engaging in coitus everywhere and anywhere they can, with great enthusiasm. Though I had no real issues with this, it's certainly NOT something I would let my 11yr old son watch, which is a shame since he quite enjoyed season 1.

With the loss of some characters, and the arrival of a surprising new bunch, this series certainly has a number of eye-openers, but I have to be honest and say that I felt the level of acting was a little sub-par in places. I am always proud to support a Kiwi show, but why is it that imported shows tend to feel more polished and professional, while Kiwi series always feel like a high-school production with a slightly better budget than they had last year? Not sure, but I do know that despite the 'rough' feel of the show it was still very enjoyable for me, and if the make another season, I will be waiting for it to reach DVD.

Overall, another pretty good Kiwi bash at the big-time. After meeting James Griffin (screenwriter for the series) at Armageddon Hamilton and sitting in on the Public panel, I know he got some great ideas for twists and plots for the potential Season 3, and that the actors - some at least - are keen to continue. Bring it on, you Norse Gods you!

During one sequence, the camera plummets as far as 5,000 metres below the ocean to find some of the most extraordinary alien-like creatures you'll ever see - some of which are newly discovered species. After seeing this, it comes as no surprise to learn that more is known ... more...