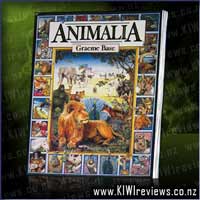 Disclosure StatementFULL DISCLOSURE: A number of units of this product have, at some time, been supplied to KIWIreviews by Penguin Random House or their agents for the purposes of unbiased, independent reviews. No fee was accepted by KIWIreviews or the reviewers themselves - these are genuine, unpaid consumer reviews.
Available:
In all good bookstores

Within the pages of this book
You may discover, if you look
Beyond the spell of written words,
A hidden land of beasts and birds.

For many things are 'of a kind',
And those with keenest eyes will find
A thousand things, or maybe more -
It's up to you to keep the score ...

I was first introduced to Animalia when I was at Teachers' College over 20 years ago. It is a fantastic book that can be enjoyed my all ages on different levels. The task our lecturer gave us was to find as many things starting with C on the C page. It is amazing how much thought Graeme Base put into creating this book. I can't recall the total of things we found on the page as a class but there was a lot of discussion because you knew everything on the page had to start with C. I have also done this same activity with older primary school children.

Younger children like the tongue twisters that he has created for each letter. This can be a challenge to the adult who is reading when tired but it is worth it. The little ones also like pointing out the things they see in the picture. My husband learnt the hard way that it is not a quick bedtime read. It is a book where the children want to talk about every page. This is very good for increasing their vocabulary and general knowledge.

Ever since I saw this book it has been a favourite of mine. I bought my copy when I was a struggling student and still get as much enjoyment out of sharing with children as I did all those years ago. My book is looking very tatty now and will be replaced one day with another copy as I know this book won't date and my girls can read it to their children one day.

This book is an absolute classic. I remember when it first came to our primary school library, and having to go on the waiting list to be able to borrow it. And it has stood the test of time.

With its absolutely gorgeous illustrations. Every creature in perfect realistic detail, and full colour. You can't help but pour over each page for hours, looking for all the things to be found. And on each reading finding more and more animals, solving more of the puzzles the author has in store for you.

This book is truly a treasure. The price is a pretty standard price for a good picture book and what you have here is an excellent picture book. I wouldn't hesitate to purchase this for my kids, or as a gift. Amazing value.

Do you enjoy puzzles? Then this is a book well worth checking out. Every page is chocker full with Graeme's beautiful artwork, and you could easily spend a good 15 minutes (and often a LOT more - very easy to lose track of time with a book like this!!) on each page, searching for all of the items hidden in amongst it all, all beginning with the same letter. Can you find them all?? How do you know you've found EVERY single object?? Can you find the young author hidden in each page?? You won't necessarily find all of him on every page. This is a book that will keep you searching for ages, and every time you look over a page, you'll most likely find something you didn't spot last time. An absolutely fantastic book, filled with many examples of alliteration and humourous situations ('Richly Robed Rhinoceroses Riding In Rickety Red Rickshaws' for example), for bored kids during school holidays or those long car journeys as well - my son loves searching the pages to see just what he can find and we quite often have a competition to see who can find the most. I definitely prefer Base's books over "Where's Wally?" books any day!! I would recommend that every parent have at least one of Base's books in their collection - I plan on getting all of them!

Overlooked in other war histories, these men played a significant role in the Allied victory in North Africa. The desert railway became a crucial strategic operation transporting soldiers, ... more...