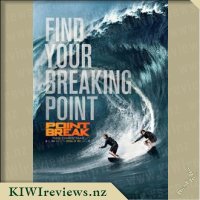 The Only Law That Matters Is Gravity.....

Rookie FBI Agent Johnny Utah (Luke Bracey) infiltrates a cunning team of thrill seeking elite athletes led by the charismatic mastermind, Bodhi. Deep undercover, with his life in danger, Utah races to prove the team is responsible for a string of death-defying international crimes - but are these criminals or crusaders? To catch them, Utah must become them.

Growing up I must of watched the original Point Break with Patrick Swayze and Keanu Reeves like a trillion times - it was my brothers favourite movie and he watched it all the time. He could say the movie word for word and I must admit I know a lot of the dialogue also. Knowing there was a remake was rather a daunting prospect as I knew nothing could be as good as the original.

I can not understand why they call this movie a 'remake' because basically it is nothing like its predecessor. Yes the names are the same and the premise is the same FBI must catch bad guys with some surfing throwing in to the mix but this is nothing like the original. The stunts are epic and besides surfing you have wingsuit flying, snowboarding, motorbike riding and then there is the rock climbing. I am not one to freak out but I found myself sitting on the edge of my seat as they were climbing Angel Falls with no climbing aids I was actually squealing. Holding on by one finger and the shear height of it all my stomach was literally in my mouth and then when they fell off the waterfall I screamed. Once upon a time I would of thought this is so cool and I would love to do it but the mummy in me has shown her face and I was afraid for them the whole time.

They should of made their own movie or even called it part two and let it stand on its own two feet, because it would of quite nicely. Using the same names just makes you want to compare the two movies. In the original Bodhi and his crew would steal to provide for them the 'endless summer' but in this movie they are not stealing for themselves instead being more like Robin Hood as they gave to the poor or liberating for the earth. The heist were just part of being extreme and helping them conquor the eight ordeals. I think this movie got the bad rap it received because they used the same title and names instead of being something new and exciting.

With the original I liked the pace of the movie and it was consistant where as this movie you were either going hell bent like a bull in a china shop or it would just slow down considerably and basically stop for a breath before the action started again. While I loved the extreme sports, amazing footage and oh my gosh the stunt work unbeleivable I hated the slow boring places. Yes definitely will be rewatching but probably not on the same scale as the original and I have to say I did miss Flea and Anthony Kiedis scene. But still an enjoyable watch.

This DVD contains the World War Two related segments from all four of the Classic Fighters Marlborough airshows (held at the Omaka Aerodrome in Blenheim, New Zealand from Easter 2001 to 2007) and features over TWO hours of contemporary World War Two aircraft and ground theatre/re-enactment ... more...