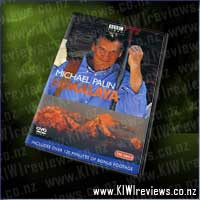 Disclosure StatementFULL DISCLOSURE: A number of units of this product have, at some time, been supplied to KIWIreviews by the company for the purposes of unbiased, independent reviews. No fee was accepted by KIWIreviews or the reviewers themselves - these are genuine, unpaid consumer reviews.
Available:
2004

"It was a great adventure, in busy, lively cities, beautiful countryside, and among magnificent peaks, glaciers, snow-fields and isolated, spectacular villages. From the highest point of the journey, just over 18,000 feet to the lowest, floating out into the sunset on the Bay of Bengal, the scenery is breathtaking, but as usual, it's the people we meet along the way - who really make the journey amazing."
Michael Palin's sixth televised international journey takes him to the Himalay (Sanskrit for "The Abode of Snow). A mighty and majestic region of Asia. His extroadinary journey takes him through Afghanistan, across India to the feared Death Zone near the base of Mount Everest and then onto the Bhutanese capital before arriving in the Bay of Bengal.

Along the way, he encounters fascinating inhabitants of the mountain range - including the Dalai Lama, the Bhutanese Royal Family and the once feared head hu8nting tribe of the Konyak.

I was interested to watch Himalaya as it followed a journey through some areas of the world that I had never been (and probably wouldn't be likely to go any time soon...).

Being a BBC doco, I expected brilliant cinematography and good information and was not dissappointed. The bonus that really made the difference though, was the character of the presenter and following him through this journey. Of course, what I didn't realise when I bought it, was that the presenter, Michael Palin, was an integral member of the comedy group 'Monty Python'. Well, it was never going to be dull and boring was it....

Across 3 DVDs we travel to amazing places, many difficult to access, and meet some even more amazing people. Although the cinematography is always top notch, it really is the interaction with the people and seeing their views and character that makes this more than an ordinary documentary. The down-to-earth and underlyingly humorous nature and outlook of Michael Palin made the journey very real and thoroughly enjoyable - next best thing to being there. His interaction with the people that we meet is always courteous, relevant (no dumb questions), and often fun.

The only improvement I would have added to the extra features would have been a gallery of photos. There was a photo book of the trip subsequently released.

Score: 4.9
Product reviews for listing 2775: The Legend Of The Guardians: The Owls Of Ga'hoole -  Director: Zack Snyder

The film follows Soren, a young owl enthralled by his father's epic tales of the Guardians of Ga'Hoole, a mythical band of winged warriors who had fought a great battle to save all of the owl kind from the Pure Evil Ones. ... more...