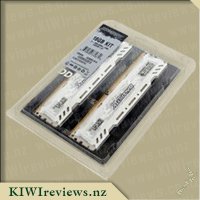 Disclosure StatementFULL DISCLOSURE: A number of units of this product have, at some time, been supplied to KIWIreviews by Crucial or their agents for the purposes of unbiased, independent reviews. No fee was accepted by KIWIreviews or the reviewers themselves - these are genuine, unpaid consumer reviews.
Available:
at selected quality retailers

Designed for performance enthusiasts and anyone who simply wants to get more out of their system, Crucial Ballistix Sport performance memory helps you do just that. Give your processor the resources it needs to perform and make your computer faster and more responsive.

Make your system go Ballistix.
Memory is fun when it's faster, when it's stylish, and when it helps your system perform at a higher level. Compared to standard PC memory, that's exactly what Ballistix Sport is engineered to do. Get faster speeds and run demanding applications with ease. Multitask at will with increased bandwidth. And strike first with better latencies and reduced load times.

Install with ease.
Getting more out of your system should be easy - and that's exactly how we engineered Ballistix Sport memory. Using cutting-edge technology, intuitive module design, certified Intel XMP profiles1 and more, we designed Ballistix Sport with the sole intent of creating affordable, easy-to-use performance memory. Installation is a cinch: just plug-and-play, and get ready to win with little to no BIOS configuration.

Choose best-fit modules for your system.
Ballistix Sport DDR4 performance memory is available in custom heat spreader options so you can pick the design that best complements your motherboard.

I can remember nervously walking into a little 1-man operation in Palmerston North back when Windows 95 was just about to become Windows 98, to order my first custom-built PC. It was going to cost me close on $4,000 and it would be bleeding-edge tech, with one of the first Pentium CPUs to hit NZ, a CD burner that ALSO handled re-writable discs, it would have a whopping 15" CRT screen, and even a SCSI flatbed scanner! The massive hard-drive - 1.2gb! - was only overshadowed by the massive amount of RAM it was going to have... packing BOTH slots with 2mb EACH! Oh, I was the envy of all my mates...

Nowadays, RAM isn't $100 per meg, or even the $1/mb it became only a few years later... now you pay as little as $10/gb for the really high-end stuff, and regular home-user RAM is less than half that. There are times that writing some of these tech reviews really makes me feel so old, which makes me wonder why, since I am only slightly overdue for my mid-life crisis apparently. Ah well, when the tech is as stylish and affordable as this, it takes some of the sting out of it. Along with those, this RAM also comes with practicality, functionality, and adorability.

Packed in a simple plastic packet, this kit consists of 2x 8gb 2400MHz UDIMMs with a very svelt and classy heat-spreader clipped over the top of all the chips. It's adds less than 2mm of height to the sticks - meaning it will easily fit into motherboards under coolers and videocards, and is no wider than most other attached heat-sinks I have come across so they will happily snuggle in with partners on most well-designed motherboards without jamming up against others of their kind and risking cracked tracers. And speaking of tracers, I did notice one tiny thing that struck me as super simple but super smart... the length of the tracers is shorter at the ends than they are near the middle! This means that as you instert the sticks into the motherboard, they don't all make contact at once, meaning it's easier to get them seated and aligned, and insertion required less pressure at the start of the process. Brilliance!

Booting up, I found there was a flawless initial POST, and once I popped into the BIOS and confirmed that they were running at maximum speed - 2400MHz with 16/16/16/35 timings - without any BIOS tweaking on my part, I was ready to let it load Windows. Call me old-fashioned, but I still prefer the old-style desktop over this simplified big-square-buttons interface. I feel a little insulted that Windows is now designed in a manner that promotes minimal use of our own brains. That's probably why British humour will always outweigh American humour for me - I appreciate something that requires me to think, instead of off-loading that task to a machine. That said, tweaking stuff in the BIOS terrifies me - as an uncounted stream of fried motherboards in my dark past will attest. Thus, I was very happy that the motherboard and RAM communicated between themselves to config accordingly.

Now... I admit, I'm not a die-hard tech geek, nor am I a gamer. This RAM is specially designed specifically for that demographic, so my testing process is neither "benchmarking" nore "frame-rates" - it's about how smoothly Photoshop works for me, how much pausing happens when I am doing lots of undo's and redo's, how quickly it can chew through some intensive action scripts, and whether I perceive any significant improvement in performance that can't be attributed purely to the amount of RAM installed - eg. How big a file I can open without the system grinding to a halt as it shuttles data from RAM to the cache drives. As my normal system's default is a DDR3 rig, I had to first borrow some entry-level DDR4 RAM from a mate in order to give me a feel for what was considered 'average' in DDR4 machines. Suffice to say, even entry-level worked really well for me, so I did take a few timings in a rough real-world kind of way.

Running the same processes with the Sports RAM installed was a bit of an eye opener as to how zippy the current rigs can be. I see now why consoles are becoming less popular again, as they date quickly and are impossible to upgrade in any significant ways. On the flip-side of that, as money allows, you can upgrade PCs incrementally to keep pace without having to splurge a grand on a new console every couple of years, and then a few grand more buying all the newer iterations of your favourite games because the consoles are less and less backward-compatible. Once you have a kick-as PC rig, your games only get better as they take advantage of the improved performance.

I noticed that with the Sport RAM in play, most of the heavy-lifting tasks in Photoshop took anywhere from 11% to 24% less time to complete, the Live Zoom ran a lot smoother, and rendering 3d layers in real-time became almost instantaneous. It was like I was using something from Star Trek: TNG. Oddly enough, even though none of the audio hardware was altered, it seemed a lot more responsive to my voice dictation software, and while the error count was no better or worse, the recognition rate was off the charts. I can honestly say that going from bog-standard to Sports RAM made a significant and noticable difference to the performance of the system. Since this is the first high-end DDR4 RAM I have tested I am unable to make a fair comparison to it's peers, but it certainly seems as though this would be up there with the better class of memory available at present.

Overall, an excellent, affordable upgrade to any bog-standard system that is finding the workload dragging it down. With the speed and size of this kit, it's bound to be one worthy of serious consideration to gamers and 3d modellers, and I can personally add that anyone who is an intensive Photoshop user would also be well advised to investigate this for their machines.

The Cintiq 12WX combines the advantages of a wide-format LCD monitor with Wacom's patented, professional pen technology to form the perfect interactive companion for your Mac or PC.

Thin and light, the new Cintiq 12WX gives you the flexibility to work directly on screen as you would on paper. Easily rotate your display when working flat ... more...