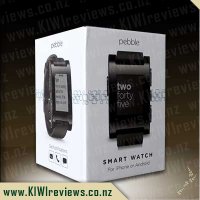 Disclosure StatementFULL DISCLOSURE: A number of units of this product have, at some time, been supplied to KIWIreviews by GadgitShop or their agents for the purposes of unbiased, independent reviews. No fee was accepted by KIWIreviews or the reviewers themselves - these are genuine, unpaid consumer reviews.
Available:
via Online Store and selected quality stores nationwide

Pebble puts critical apps and notifications on your wrist, giving you immediate access to what's most important. See who is calling or get the most important emails and texts without having to pull your phone out in the middle of a meeting.

Want to track your runs? Get notified when your team scores? Kick off voice nav without touching your phone? Thousands of developers worldwide are making apps to let you leave your phone in your pocket.

NOTIFICATIONS
See your most important notifications. Even when your hands are full

MUSIC CONTROL
Control the music while driving, running, or across the room. No need to mess with your phone

FITNESS
Check your pace without killing your pace. Get the info you need without taking the phone out

ALARMS
Pebble can wake you up with a silent alarm that only you'll feel, while your partner sleeps on in bliss

OTHER
•  Watch case: polycarbonate
•  Band: TPU rubber or silicone (white Pebble only)
•  Cleaning: wipe with a soft, moistened cloth; if necessary, use isopropyl alcohol, or water with a mild detergent
•  Works With iOS & Android

While I am not the biggest geek out there, I do like the concept of this watch - a device I can wear that hooks into my smartphone and displays key information such as the Caller ID of incoming calls and texts, the content of the texts, notifications and alarm reminders, and a host of other data depending on what apps I have installed on it. While it is still not a full two-way interface, it is still a vital piece of kit when I am in noisy environments where I can't hear my phone ring, and especially vital if I am driving, so I can decide whether I need to pull over and reply to the text, or accept an in-bound call via my handsfree car kit without having to take my eyes off the road for more than a split-second.

Setup was surprisingly easy, and while doing it via a Wi-Fi connection would have been faster, it was still fairly quick to do through regular mobile data. After downloading the required app, quickly setting up and activating the watch was a matter of minutes. By far the longest patch of the setup was browsing through all the apps available and deciding which ones I wanted to trial.

In the end, I settled on a third-party notifications manager, a watch face that ties into my scheduler and calendar, a QR-Code contact card generator and a mini notepad app for those impromptu to-do lists. The watch can run up to eight apps at a time, and you can store more 'in limbo' on your phone in a special 'locker' folder. There are hundreds more to choose from, though many seem to be location-specific to other countries, mainly the US.

On the downside, there is a known bug in the Jellybean version of the AndroidOS that causes your phones to flip into full-on 'blind person' mode when you activate any form of accessibility service, such as the notifications pipeline to an external device. While severely frustrating, annoying and eventually maddening to the point of insanity, this is actually an issue with Google's OS and not, as you may at first assume, an issue with this device or its controlling app. Disabling all your phone's text-to-speech services appears to be the only solution.

While the watch does have limitations - it's not a high powered device - it does do everything it promises without hesitation. Being waterproof, you don't even need to worry about taking it off when you wash your hands. I'm not brave enough to try wearing it in the shower, but that's fine since I wouldn't normally have a watch on in the shower anyway. I did like the fact that right out of the box you have a selection of watch faces to choose from - analogue, digital and words. That is a really nice touch. My only 'awww damn!' is that it's using the low-power e-paper technology, so it's just black and white, no colour... However that is why this has such a great charge life.

Overall, this is a great gadget that transcends its 'geek-toy' reputation and slides comfortably into the 'productivity device' genre with style. Would be better at a lower price-point though, but maybe it will become cheaper as the technology matures.