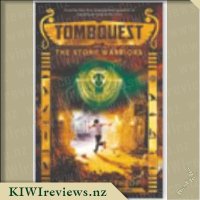 Disclosure StatementFULL DISCLOSURE: A number of units of this product have, at some time, been supplied to KIWIreviews by Scholastic (NZ) or their agents for the purposes of unbiased, independent reviews. No fee was accepted by KIWIreviews or the reviewers themselves - these are genuine, unpaid consumer reviews.
Available:
Available Jan/Feb 2015

I have never read a TombQuest book before, and you might think that book four is a weird place to pick up a book series. Indeed I was a little uncertain about it myself. However, I had access to the book thanks to it being a review item and the first page of text hooked me very quickly.

The rapid pace of action throughout this book hardly let's up. This was the first thing that drew me to the book. It was hard to put down almost immediately because the characters are running through an unknown part of a city. They have no idea where they are but something seems to be after them. Even in the quiet times, danger lurks everywhere. For this reason alone I found that once I picked it up, I burnt through each chapter quite quickly.

Despite it being book four, I felt like I got plenty of back-story to Alex, and Ren and the other characters in the book. We get to know just enough about things that have previously happened, to make sense of plot twists as they happen. Although some of it was predictable for me, I know a younger reader would not have picked up on the main twist in the book as I did. I have a suspicious mind. Still, I liked the clues and the unraveling needed to find what they are after.

I know a little about ancient Egypt as I studied ancient history as a supporting for my degree. This book was exciting for the historian in me and feed my need for fantasy and magic too. There is enough stuff about relationships and coming of age for the younger characters to cut up the urgency of the action and vice versa. For this reason, I think this book would be great for either boys or girls. Though some of the creatures in it were quite yucky and could be scary for those who don't like a good scare.

Now that I have read this one, I would not be opposed to going back and trying the first three books in the series. I would definitely share the series with my eldest daughter. She enjoys mythology and learning about ancient worlds, so I think that this would be a winner for her too.

For a while I had actually forgotten about this series, but when this new addition to the series hit the "for review" pile, I was happy as I REALLY needed something new to read, and this series has kinda grown on me. The book still follows the series' theme of combining ancient Egyptian magic with the modern-day world in a manner that is rather surreal and a bit difficult to visualize, but this book in particular added a rush of solved mysteries and is a little more focused around the "ancient forces" aspect of the general plot.

This made it a bit easier to visualize the events going on within the story, and it also made the story itself more immersive and exciting. I think that the storyline was quite smooth, I spotted no major plot-holes (which are the worst) and everything seemed to flow and transition quite well. The book picked up after a very interesting cliffhanger from the previous book, where Alex, the main protagonist of this series, had just gotten out of a very difficult spot in a manner that was impressive even considering the large number of fantasy books similar to this that I've read in the past.

From this interesting starting point the book continued to delve deeper into the true intentions of the enemy group known as "the Order", which has brought to light a lot about the Order's place in the grand scheme, and it was a very interesting concept to say the least. Another saucy twist was the truth that a character who was introduced in the second book (which I didn't get to read

) that I thought had died at the end of book 3 was still alive and ticking, and despite him being a character that isn't all that likable, I was glad that he survived, even if he only featured briefly in the story.

Overall, the events that took place in this book lead me to believe that there are only 1-2 books left in this series, and just what went on in this book alone near the end has made me very excited and curious about the eventual endgame that is on the horizon. The book itself was a good read, and was very engaging. I think that this book has a rather broad age range, I would say it is good mainly for kids aged 10-17, as it is a slightly more sophisticated type of book that could potentially bore most adults, but can entertain the teens and 'tweens alike. I look forward to book 5, which I will be happy to get stuck into as soon as it lands in my hands.

Stephen Hawking's worldwide Best Seller, A Brief History of Time has been a landmark volume in scientific writing. its author's engaging voice is one reason, and the compelling subjects he addresses is another: te nature of space and time, the role of God in creation, the history and future of the universe. But it is also true that in the years since its publication, readers have repeatedly told Professor Hawking of ... more...