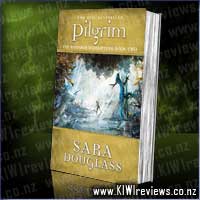 The Star Gate is destroyed.

The Star Dance is dead.

Enchanters, gods, and humans alike are helpless as the TimeKeeper Demons lay waste to Tencendor.

There must be hope left, but no one knows where to find it. Death lurks in every twist of the Maze, but only those who have the courage to endure death can learn the secrets of the ancient enemy. Caelum and his parents go to Star Finger, hoping to discover the mountain's ancient secrets. Zared tries to help his people, but loses that which he loves most to the appetities of the TimeKeepers. Meanwhile, Faraday grows fearful, wondering if she will be trapped in her previous fate. Must she lose everything for this land?

Qeteb waits, as he has waited tens of thousands of years, for the StarSon ... for revenge ... for the hunt through the Maze.

Reading Pilgrim was heavy going for the first half, with demons ravaging the land and the future looking extremely bleak - I had to force myself to pick up the book and read the next chapter. But Drego gradually transformed into a hero I really cared about, pulling tricks and powerful magic out of his cool cloth sack and bringing hope and love back into the story.

This is becoming a common pattern with the Sara Douglass books I have read so far. I get to a point where I am just about to give up on the book and then she pulls out an amazingly likable and truly awesome character and suddenly I can't put it down.

Pilgrim has set this trilogy up to be epic, moving and truly satisfying, and I know that Douglass will deliver on that promise in the final instalment. Her work is complex and layered, meaning you have to expend some effort in the beginning, but it certainly pays off. I look forward to seeing how she ties all the pieces together in Crusader.

The Gestapo called her The White Mouse and they wanted her, dead or alive. Nancy Wake was an Australian who joined the French Resistance during World War II and became the most wanted woman in France. Parachuting behind enemy lines, blowing up bridges and smuggling refugees across borders, Nancy fought fiercely against the enemy and became the most decorated Australian woman in any war.