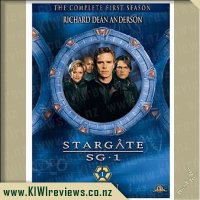 The Stargate is an intergalactic gateway developed by an ancient civilisation, that links other planets from other solar systems to ours. The U.S. Air Force assembles a Stargate team headed by Colonel Jack O'Neill (Richard Dean Anderson, a.k.a. MacGyver) for interstellar peace-keeping missions. Boasting incredible special effects sequences, rapid fire pacing and awesome scenes of alien warfare, Stargate SG1 is your gateway to pulse-pounding sci-fi action! This DVD box set features the complete episodes from Season One of Stargate SG1 across 5 discs.

The Zone, on SkyTV started playing Stargate SG-1 right from the first episode and considering it has been awhile since I have seen it, so I set it to record and we've slowly been watching right from season one, episode one.

We start off just a few years after the movie took place with Colonel Jack O'Neill and Samantha Carter heading through the stargate. After his wife is taken by the Goa'uld, Daniel Jackson joins the team and they are then aided by a Jaffa, Teal'c, who helps them in their escape. They form SG-1, a team who's goal is to step through the gate, to unknown worlds, exploring them and trying to save the universe one planet at a time, or at least survive it.

The great thing is that, though the Goa'uld are in almost every episode, it's not the main aim of the series, there is still plenty of exploration and discovery going on. Whilst the acting didn't feel that natural to begin with it does adapt and get better through the season, though Teal'c still simply looks like he is angry at the universe 100% of the time. Most of the story lines are well done and there were only a couple that I wasn't too interested in.

A fun season and I look forward to watching the next.

Hancock's Half Hour could be described as the yardstick against which all subsequent British sitcoms have been measured. Based on his famous radio show of the same name, the TV show made Tony Hancock Britain's leading comic of the day.