Home > Categories > Movies > Spiritual/Occult > What the bleep do we know?! review

Elvis - by the Presleys review

ProdID: 667 - What the bleep do we know?!
Directed by William Arntz, Betsy Chasse, Mark Vicente 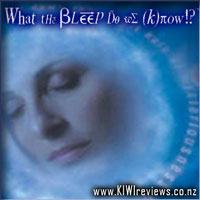 What the bleep do we know?! product reviews

WHAT THE BLEEP DO WE KNOW?! is a new type of film. It is part documentary, part story, and part elaborate and inspiring visual effects and animations. The protagonist, Amanda, played by Marlee Matlin, finds herself in a fantastic Alice in Wonderland experience when her daily, uninspired life literally begins to unravel, revealing the uncertain world of the quantum field hidden behind what we consider to be our normal, waking reality.

She is literally plunged into a swirl of chaotic occurrences, while the characters she encounters on this odyssey reveal the deeper, hidden knowledge she doesn't even realize she has asked for. Like every hero, Amanda is thrown into crisis, questioning the fundamental premises of her life - that the reality she has believed in about how men are, how relationships with others should be, and how her emotions are affecting her work isn't reality at all!

As Amanda learns to relax into the experience, she conquers her fears, gains wisdom, and wins the keys to the great secrets of the ages, all in the most entertaining way. She is then no longer the victim of circumstances, but she is on the way to being the creative force in her life. Her life will never be the same.

The fourteen top scientists and mystics interviewed in documentary style serve as a modern day Greek Chorus. In an artful filmic dance, their ideas are woven together as a tapestry of truth. The thoughts and words of one member of the chorus blend into those of the next, adding further emphasis to the film's underlying concept of the interconnectedness of all things.

The film employs animation to realize the radical knowledge that modern science has unearthed in recent years. Powerful cinematic sequences explore the inner-workings of the human brain. Quirky animation introduces us to the smallest form of consciousness in the body - the cell. Dazzling visuals reinforce the film's message in an exciting, powerful way. Done with humour, precision, and irreverence, these scenes are only part of what makes this film unique in the history of cinema, and a true box-office winner.

I have seen this film three times now, one of them the extended edition, and I find it far more engaging and credible than other films in its genre. I love the way Amanda's story weaves through the interviews, making the ideas fun and accessible. I really connected with her journey and found myself desperately wanting her to overcome her self loathing and find some way to be at peace with herself.

The ideas presented throught the film were certainly challenging and left me thinking long after I had finished watching. I especially loved the section that dealt with water crystals - based on the research by Japanese Professor Masaru Emoto - showing the effect of positive and negative emotion on the formation of crystal patterns. Absolutely beautiful and mind blowing.

Some of the 'experts' I found resonated with me far more that others, but the whole experience of watching this film is definitely not to be missed.

I was initially sceptical about a film that promised to change the way I viewed the world, but it got off to a good start and kept me interested for a while.

The film was well organised, with alternating segments of the storyline following Amanda and interviews with a wide range of people. I lost interest when animated embodiments of the characters' emotions turned up - in fact, I found them annoying. Fortunately, the interviews connected to the storyline enough to make it watchable.

It was slightly disappointing to find out during the end credits that one of the interviewees was meant to be a medium channelling an ancient spirit. I'd managed to get the impression that the people interviewed were academics. Some of the experiment results referred to in the film also reduced its credibility for me.

The documentary makes a lot of claims which don't sit well with a sceptic like me - and I'm still sceptical about much of the material. However, it does seem (after watching the extra material on the DVD) that the makers are genuine in their beliefs. If you're good at getting what you need from a film then you don't have to subscribe to the documentary's views in order to benefit from it - it's easy enough to do your own research afterwards.

I think that this film can help us change the way we see the world, regardless of whether we agree with the theories behind why we should do so.

I have to get my own copy on DVD. I borrowed a friend's copy of the film and was, to put it bluntly, 'Blown away'.

This film offers endless possibilities that one can create the life you want, one can create your day which is underlined by the link on the website 'I create my day'.

This film is being used by a therapist friend to help people create a more positive outlook on life and get around the problems.

This film is one that everyone should watch, but it cannot be watched once, I feel one only really gets a taster of what is going on with one, but this is not to denigrate the film, I personally feel one gets more from it on each subsequent viewing.

I really need to get my own copy....NOW

In a universe of infinite possibilities, why do we live the lives we live? Why DON'T we get that promotion, that new car, that gorgeous lover, those wants, needs and desires? Is it because the universe itself has singled us out and dealt us a fate that includes misery and pain? Or is some overwhelming deity picking on us for It's own amusement? Or perhaps is it that we simply believe that this is what we really deserve? Questions like this have often been the dominion of mystics, scholars, priests and philosophers. Now, thanks to the new paradigm of the Quantum Sciences, the questions are brought back from external, and into internal space, the mind and soul.

Quantum Physics describes a phenomenon casually referred to as the Observer Effect. Nothing is 'real' until it is observed, at which point all of the multitude 'possibles' collapse into one 'definite', thus become rigid and real to us. But what happens if it is not observed? The old puzzle, "If a tree falls in the woods and no-one is around to hear it, does it actually make a sound?" is a step too late. The question could indeed be "Is there a tree in the woods to fall at all, if no-one observes it to be there. And thus, does it fall, or is it always fallen?"

Our brain can only deal with less than a tenth of the information our senses gather... for every 10 stimuli, only one gets made 'real' to us... we ignore and discard 90% of the world around us, every second of every day of our lives... so how can we claim that we know what is real at all? It really bends the ol' noodle when you start to think the 'Big Thoughts'... which is probably why there are so few in the world who even contemplate such things... most people are too overwhelmed, or lazy, to care about it... and those are the ones who live the lives they expect to live, instead of those they want to live.

This movie is somewhat erratic in places, with scene shifts and jumps, and what, at first glance, appear to be continuity errors (Watch the drink umbrellas at the Wedding!) but upon further thought, are more likely subtle reflections of the nature of Quantum Reality in action. 'Amanda' is subjected to conscious reflections of parallel worldlines intersecting and overlapping, and she realises she has been choosing pathways that lead her to the wrong places. As soon as she starts to change, so does her whole outlook, and life.

I enjoyed this movie quite a lot despite the $15 ticket price, and would have been totally absorbed if not for the constant chatter and laughter of a group of inconsiderate Uni students up the back. 94 minutes into the movie before they were finally told to shut up, by which time I had lost the plot and just had to cruise through the remaining 20 minutes. Amanda's story was chopped into sections by the interleaved interviews with some very intelligent and surprising experts in their fields... from Masters of Divinity to spirits of the dead being channeled by a psychic.

Overall, though it sounds a little hokey in places, and is definitely a movie you should see at least twice, I found myself being affected by it at a fundamental level. It gave rise to much thought and provoked a lot of inner reflection for me. For those who haven't got the time/money/chance to see the movie, despair thee not, for there are a number of comprehensive websites set up on the topic. Two of them more directly-linked to the movie are:
•  www.whatthebleep.com
•  www.whatthebleep.com.au/film.asp
and they are both worth a good look. Go on, you really don't know what you are missing... and you're not a heretic or blasphemer for being curious... you'll be surprised.