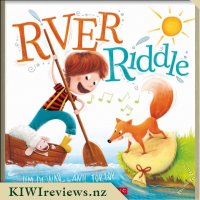 Disclosure StatementFULL DISCLOSURE: A number of units of this product have, at some time, been supplied to KIWIreviews by Scholastic (NZ) or their agents for the purposes of unbiased, independent reviews. No fee was accepted by KIWIreviews or the reviewers themselves - these are genuine, unpaid consumer reviews.
Available:
August 2015

Jack's off to market, with a bag of hay, a sheep called Dolly and a fox called Frank. How will they all cross the river in the tiny boat? Jack will have to solve the River Riddle to get to the other side!

"As Dolly thinks: 'That hay's for me!'
And Frank thinks: 'Dolly's mine for tea!'
Young Jack does lots of thinking too,
And comes up with a plan... can you?"

Jim Dewar has written a puzzling book with a awesome riddle for young readers. This is the first time I have come across with a story for this level with a complicated riddle before - yet it is still a picture book.

This story is about a young boy trying to get across the river - but there is a problem how is everyone going to get across??? I loved how Mr 4 related to this story. He decided that the boy was the same age as him and put himself in his shoes. I asked him how he would solve this problem and he came up with many different answers. This book really leant towards deeper thinking and problem solving, something I am always looking for in children's books.

When we continued to read on to how the boy solved the problem Mr 4 came up with more problems that might arise. For example why doesn't the sheep run away? Why doesn't the fox swim? (yes he remembers the gingerbread story). Anil Tortop has illustrated this book with fun and colourful pictures that both children and adults will be drawn into to.

I am really delighted that I have been introduced to this book and am keen to share this with many people. My next step is to encourage my son's deeper thinking by writing our own riddle story.

This book was a bit of fresh air to read. It was quite different to other books I have read. I enjoyed it as much as the children did. It was not only a fun story that Miss 3 enjoyed at face value, it was a bit of a challenge for Mr 5's thinking (as well as my own!). Although the title is 'River Riddle', I didn't realise that it involved a riddle as part of the storyline. It makes sense though!!

The book is written in a rhyme. The kids were able to fill in a lot of the words in the rhyming phrases as I read it. I always encourage the children to join in in such a way, as it allows them to be part of the experience rather than passive listeners. They also get a good sense of what words might work in the phrase.

My mum read this book to the kids last night and she recognised the story as she said it was similar to a book she knew from years ago. As a result, she was familiar with the riddle required to solve the problem in the book. It was new to me and I had to stop and think for a moment or two to figure out how it might work. Even as I was reading each page, I thought I had it right and didn't! I think that although it is a picture book, it would work well with older children as well. I do a bit of relief teaching and I would happily use it with and primary school aged children as the older ones could be given the task of figuring out the riddle themselves before hearing the full story. I think that they would enjoy it!

The text is a nice size for reading and it very clear, regardless of whether it is printed onto the white background or coloured background. The illustrations are cute and entertaining and the eyes on the characters kept catching my eye as I progressed through the book.

Miss Three is often called 'Dolly' in our house and she thought that it was very funny that the sheep was called Dolly in the book. To make it even more personal to our family, my nephew is Jack and my dad is Frank. Miss Three thought it was fantastic that the characters were named after people in her family (or at least in her opinion anyway!).

At least, that's what everybody at Sci-Fi Junior High thinks. So ... more...