A Flash of Blue review 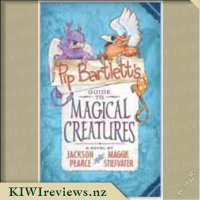 Pip is a girl who can talk to magical creatures. Her aunt is a vet for magical creatures. And her new friend Tomas is allergic to most magical creatures. When things go wrong, as they often do, Pip consults Jeffrey Higgleston's Guide to Magical Creatures, a reference work that she finds herself constantly amending, dealing with magical creatures like unicorns, griffins and fuzzles doesn't just require book knowledge, it requires hands on experience and thinking on your feet too.

For example, when fuzzles (which have an awful habit of bursting into flames when they're agitated) invade your town, it's not enough to know what the fuzzles are Pip and Tomas must also trace the fuzzles' agitation to its source and in doing so, save the whole town.

One of the best things about having children is you get to relive all of the magic and pretend that mythical creatures really do exist. As soon as I saw this book I knew that I had to read it. Finding out more about these amazing animals was just too good of an oportunity to pass up.

Both of my girls want a pet Unicorn and to be honest so did I until I read this book and found out how vain they really are. They are extremely self centred and only think about themselves and how beautiful they really are. Okay this is going by this book but it is so fun to read about something and truely beleive they really do exist and are living among us and finding out about all of their pit falls.

Pip has the extremely lucky ability to talk to magical animals. She can understand them and they can understand her. No one beleives she has this ability so makes for interesting times. She gets to spend some time at her aunts house after an Unicorn incident. Her aunt runs a vet clinic for magical animals and Pip gets to interact with all sorts of animals. I have to admit I am a tad jealous because how cool would it be to talk to animals?

It is a very easy read and is well suited for teens. Scattered throughout the pages are diagrams of mystical animals with explanations about them. Unfortunately my book seemed to miss a couple of lines on the description which is rather depressing as I am so interested in what was to be said about the Unicorns and the Juvenile Pegasus. But that did not stop me from really enjoying the book. I am hoping that it turns into a series as I really loved the topic and the style of writing.

This will definitely become a bedtime story for the girls after we finish the current book that we are on. The chapters are not that long and the topic will definitely hold both of their interest. I would of liked if more people learned Pips secret as I am sure she could of helped so many animals in the long run with her ability, but, I guess her age plays in to it. Still a fantastic read.

Growing up I always had an interest in fantasy, mythology and magic. I use to get books about all aspects from the school library and would read and read, especially about magical creatures. So when I saw the front cover of this book, I was excited. On the cover there are two creatures that look a bit like griffins. There are then lots of muted creatures behind them too, including a unicorn. I did find the many different fonts on the cover a little jarring. There are 6 different fonts used for the title, and it took me ages to read it. Still, that was my only complaint about the whole book.

I sat down to read this by myself, and I got about 2 pages in, before I realised that my eldest daughter would probably like the book. I stopped reading, and moved into the room where she was playing. I asked if she would like me to read to her, and she was keen. This is how it started, because every night we have had a chapter or two of this book. The book has a few black and white pictures of different creatures in it. There aren't many, but my daughter has spent time studying each of them.

Aside from the pictures is a spell binding story about a girl called Pip, who is able to talk to magical creatures. Imagine your every day world, but there is a whole other set of animal types out there, and they are all magical. That's pretty much the setting of the book, so it is quite relatable while still being really exciting. We did a lot of imagining what it would be like if Grims and Griffins and Unicorns actually existed!

The characters are really cool. We know a little about each and the authors do an amazing job helping you get to know them without the details about them taking away from the narrative. I really liked Pip because she is confident, adventurous and cool under pressure. She reminded me of my daughter a lot. Tomas was a bit more like me, and we loved his allergic reactions. My daughter thought the Grim one would be the most fun.

There are lovely characters and likeable animals. But then there is also one very nasty character. Tonight as we came to the end of the book, my daughter shouted at the book a couple of times because the baddie was being a "horrible person" and it "wasn't fair". I agreed with her, you aren't going to like this horrid lady, but that's part of the fun too. Now it's all over, I wish there was some kind of sequel I could bring out for her. Hopefully more to come?!

- What were the models for the Order of the Phoenix?
- Where do those names come from?
- Could Snape's potions actuall;y work?

J.K. Rowling fills her books with references to history, myths, legends and literature. The Magical Worlds of Harry Potter reveals the stories behind the stories.

In this fully updated edition, all the questions you ever wanted to ask about Harry's fantastical world are answered. ... more...