« Back Off Bully review

ProdID: 123 - Welcome to the Jungle (aka The Rundown)
Directed by Peter Berg 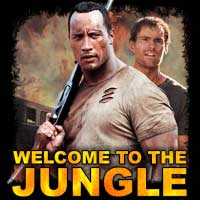 Welcome to the Jungle (aka The Rundown) product reviews

A Los Angeles bounty hunter named Beck (The Rock) is instructed by his boss to travel to the Amazon jungle to retrieve his smart-mouthed, dimwitted, double-dealing son, Travis (Seann William Scott), who's been leading a life of adventure in Brazil.

But Travis is reluctant to leave, and when he tells Beck about a hidden golden idol, the two join forces and head back to Helldorado, where they join forces with a woman bar-owner with a secret, (Rosario Dawson) and come head to head with the town's half-crazed fortune-hunting leader (Christopher Walken).

There are some things that you try to tip-toe around in life. As a mega wrestling fan, I was quite skeptical about seeing "Welcome to the Jungle" starring wrestlings greatest export to the movie industry, 'The Rock'. I guess the reason for being skeptical about it was the fact that usually wrestlers bomb out in movies. We all remember Hulk Hogan movie attempts, right?(Suburban Commando, No Holds Barred, Santa with Muscles, Mr.Nanny.....I'm cringing just writing the names!!!). But thankfully, The Rock saved face in this movie with quite a good effort.

If you go into the movie expecting realism and a plot with more twists and turns than a slinky down 12 flights of stairs, then most probably you will be disappointed. However, if you just want a good action/comedy flick then this is probably for you. For wrestling fans, The Rock shows us that he can indeed adapt his style that we are so used to seeing from him and there are some genuinely funny bits. Helped no doubt by the presence of Sean William Scott (aka Stifler....he's Stifler in all his movies, just a different form) and Christopher Walken. This movie held my attention all the way through. There are plenty of action sequences not to be missed and if you hire it out on DVD you can also see special features such as training for the fights and how all the special effects were created.

Overall, this was an enjoyable movie. After 'The Scorpion King' and now 'Welcome to the Jungle' I am eagerly anticipating The Rocks next movie 'Walking Tall' co-starring Johnny Knoxville of Jackass fame. Thanks to The Rock, I am confident that I have finally shaken the mindset that wrestlers and movies don't mix.......because this is one that I would definitely watch again!

C'mon... it's THE ROCK for heaven's sake, how good could this movie possibly be?

My answer was... Not too bad at all, actually. However, in typical Hollywood 'Action Comedy' style, there was lots of fire, explosions and people flying through the air... but what impressed me the most was just how good it looked! No sign of the tell-tale signs of fly-by-wire rigs, decender rigs, etc. Even the 'falling down the cliffside' looked painfully real.

'Yeah, Right!' bits:
- The Rock walking away from an exploding bus, looking staunch and standing tall while everyone else is thrown to the ground by the fireball.
- The sheer brutal speed of The Rock beating the snot out of 'the entire offensive line' of American Footballers in a nightclub, then getting taken out by a guy with a bean-bag gun outside.
- Some little rebel fighter in the jungle beating the snot out of The Rock, hurling him 20m up into a tree.

'AWESOME!' bits:
- The scenery of the beautiful Amazon Basin area.
- Christopher Walken once again pulling off a wonderful rendition of the nut-case bad-guy.
- The fact that it was Cheap-Night at the local cinemaplex.

Overall, I would have to say that it was cool to watch this one once, but I doubt I would pay to see it again. Would watch it at a mate's place, sort of thing, but wouldn't fork out more than $3-for-8-day rates myself. And watch for the subtle uncreditted cameo of Arnold Schwarzenegger as a bar patron.