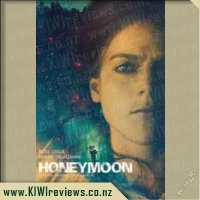 A honeymooning bride (Rose Leslie) goes sleepwalking into the woods surrounding a secluded cabin. When she returns she looks the same, but something about her is frighteningly different. Searching through online social networks I noticed a user had written up a list of the top recent Horror films of 2014/15. In that list I saw "Honeymoon". In all honestly, if I hadn't seen that post with the description of the movie, I would have completely missed this film. The title gives no clues, and the DVD art is just as helpful at telling you what the film is about.

The film itself I found had a similar plot to another movie that I had watched recently "The Device". Both take place near a cabin in a remote location, and both films have a very limited cast, and initially focus on emotional events rather than straight action. This film however has the advantage of starring Rose Leslie (a.k.a. Ygritte from "Game of Thrones"),

The opening scenes use a wedding video as a means to explaining the back-story of the characters; knowledge that becomes very important to the plot further in. It is weird to watch a movie that is a horror film, but has no weapons, no known villains. It deals only in suspense and mystery. It took me a while to realise that the entire film used only 4 actors/actresses. As not even the bad guys are visible, it gives the film a realistic tone to it. You aren't concerned with poor effects. and when effects are used, they are used sparingly, which is great. Plot is more important than effects.

Overall the film was slow, but I enjoyed it. Unfortunately, I spent most of my time comparing this film with "The Device", but I was pleased at the differences. I would consider this film to be the superior of the two.

Hacksaw Ridge is a 2016 biographical war drama film about the World War II experiences of Desmond Doss, an American pacifist combat medic who was a Seventh-day Adventist Christian, refusing to carry or use a firearm or weapons of any kind. Doss became the first conscientious objector to be awarded the Medal of Honor, for service above and beyond the call of duty during the Battle of Okinawa.