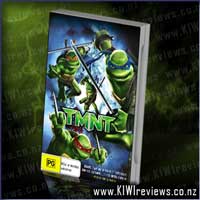 Cowabunga Dudes! Raphael, Donatello, Michelangelo and Leonardo are back - lock up your pizzas! The lean, green, crime-fighting machines return in a new incarnation for the 21st century in this mind-blowing CGI action extravaganza.

From extreme skate-boarding through the sewers of New York, to saving the world from an army of ancient stone monsters, they're on a mission to bring ninja style to the masses. Loaded with fun, spiked with a wicked sense of humour, exploding with cutting-edge special effects and packed with non-stop martial arts action, Turtles are to the rescue.

Having grown up loving the cartoon of Teenage Mutant Ninja Turtles, I had mixed feelings about this movie. Would it live up to the old standards? After seeing the ad for it, I had a feeling it wouldn't, but my son was extremely keen to watch it, so into the DVD machine it went one afternoon. As much as I'd loved the old cartoon, this movie was most definitely an improved version!! With a lot more action, and a more "adult" feel, yet still being suitable for kids, I was once more hooked into the story of these four turtle brothers who, like typical siblings, fight constantly, yet would do anything to protect each other when the situation called for it. Leonardo and Raphael still battle it out for the position of Leader, Mikey is still the ratbag "little boy" of the group, and Donny is still the ever loveable nerd. Other old faces, April O'Neil and Casey, are in for the ride as a new enemy appears, bringing the brothers back into a working family unit once more, under the firm, loving rulership of Master Splinter.
Kids young and old will enjoy TMNT, and it's definitely a must-watch if you're at all a fan of these "heroes in a half-shell".

Score: 8.8
Product reviews for listing 5906: Her
Directed by Spike Jonze