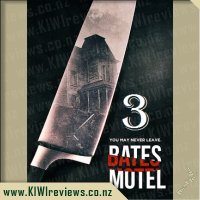 The "contemporary prequel" to the 1960 film Psycho continues in season three, following the life of Norman Bates and his mother Norma prior to the events portrayed in the Hitchcock film. The series takes place in the fictional town of White Pine Bay, Oregon and follows Norman as he looses further touch with reality and all are left to deal with that and the trials occuring in their own lives.

I no longer think of this cute, happy go lucky kid when I envision Freddie Highmore now, nope, Bates Motel has taken away the sweet, innocent picture out of my head and promptly thrust this glowering, psychotic young man in its place instead. Highmore is brilliant in his role as Norman Bates, we all know where he's going to end up but the slippery slope to it is being scripted so well, acted out so well that knowing how it ends just doesn't matter. It's also worth noting that Higmore has recieved a nomination for his role, along with Vera Farmiga who plays his on screen mother, Norma.

As with the other seasons, there are stories going on in the background and they are twisted and you know the town is really screwed up but it keeps things interesting and I'm enjoying their stories just as much as I am the main storyline. I'm rather interested in psychology and always interested in knowing what leads people to be a certain way and here we have Norman, who clearly needs help but it is obvious things are happening too little too late. The music really sets the scene and fits in perfectly with what is going on in each scene, the scenery is spot on and it all melds together to craft a show well worth watching.

I'm sad that season three has come to an end but I am so thrilled to see that a season four appears to be on the cards and I will be eagerly awaiting for it to grace my TV screen again.

Patrol Boat sailors say their job is the best in the Navy. A small boat and its crew facing real dangers - not just war games.

There are plenty of examples of those dangers in the 4th explosive series of Sea Patrol. The crew of the HMAS Hammersley is back on duty cruising Australia's tropical north from the Great Barrier Reef and through the waters of the Torres Strait. With 24 sailors from every walk of life, of every age and ... more...