Home > Categories > Entertainment > Television > The Day of the Triffids review

In Your Honor review

ProdID: 627 - The Day of the Triffids
Type of Show: Sci-fi Thriller 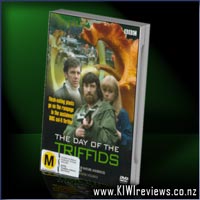 The Day of the Triffids product reviews

Following the earth's close encounter with a comet, a meteor shower strikes Britain's population blind. Bill Masen, recovering in a London hospital from a vicious attack from a new species of plant, is one of a few to survive with eyesight intact. The world he emerges into has already terrifyingly altered.

The government has collapsed, bands of renegades are thriving in the anarchy, and a hostile, carnivorous form of plant life, the Triffids, have begun to prey on the weakened and vulnerable human population.

For Masen, life is now a desperate struggle...

Long have I been a fan of John Wyndham's work. A trilogy of his novels were converted into my first encounter with his works, a TV series called "The Tripods" (to which the main alien stars of the recent "War of the Worlds" bore a striking resemblance in appearance). This series sparked my love of sci-fi, and when I discovered he had written many other stories, I simply had to read them.

So it was with great joy I can now sit and re-watch the Day of the Triffids on DVD. Even in today's world of super-special effects, this series can still thrill me. Some classics will always be great. There were, however, many loose ends in the plot, such as the reason for the Triffids making repeated clicking noises with little vibrating stems against their motile base (Yes, Triffids can uproot and move around)... with their sensitivity to sound, it could almost be argued they used it as some for of sonar, much the way bats do.

Overall, this is a great sci-fi series, and it's great to have all the episodes on one disc. If you have some to spend, you can pick your way through the episodes, but if you have nothing better planned, you can watch the whole story unfold. A story of how one man struggles to keep alive and find a life worth living in a world gone blind, and mad... a world where being able to see could be more of a curse than a blessing... a world that could, soon, be ruled by a new dominant species, a species of carnivorous mobile plants. In the land of the blind, the seeing man could be king... but many of the blind want to be kings, and use the sighted as slaves, hardly more than seeing-eye dogs, and treated with far less respect. There are more than enough plot-elements to keep anyone happy and hooked. Well worth the investment.