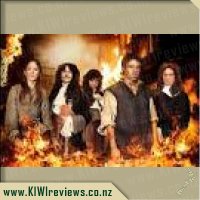 Disclosure StatementFULL DISCLOSURE: A number of units of this product have, at some time, been supplied to KIWIreviews by Roadshow (NZ) Ltd or their agents for the purposes of unbiased, independent reviews. No fee was accepted by KIWIreviews or the reviewers themselves - these are genuine, unpaid consumer reviews.
Available:
4 Feb 2015

Shortly after midnight on Sunday 2 September 1666 a fire started in a London Bakery on Pudding Lane. This inferno burned its way into history as the Great Fire of London, raging for four days and bringing the Capital City to its very knees. Cathedrals, shops, inns were all lost and 70,000 of the City's 80,000 inhabitants were made homeless.

The Great Fire brings that history to vibrant life through the eyes of the people on the ground. A cross section of society from King Charles II to Samuel Pepys, to Thomas Farriner the King's baker in whose premises the fire began.

Written by ITV Political Editor Tom Bradby (Shadow Dancer) it draws on his jornalistic experience to recreate the chaos of a city imploding at the fear and rumours of treachery that took hold. The gripping new drama is from the makers of Fleming and the movie Mrs Brown.

A definite feeling of 'made for television'. Three hours, made up of four episodes. Roughly its an episode a day starting from the accidental smouldering ember that caught light on some straw and ending with London finally putting the fire out.

The problem with these movies is you do not know what is factual and what is not. The fire actually takes a back seat and the conspiracy to kill the king is more of a focus. Its rather political and the king's (apparently fictional) spymaster jumps from one scenario to another. It's as if Lord Denton was not aware that a fire was actually occurring, instead trying to blame Catholics for an apparent attempt at the king's life. I would of preferred that had just focused on the fire. But then I guess there is only so many burning buildings you can watch.

The movie itself is rather tedious and if it was not for the review I would of turned it off. The acting and casting were fantastic do not get me wrong it was just a boring story and really focused more on the king and his paranoid spymaster. The clothing was correct for the era and looked great, except for the bakers pants that looked so weird and out of shape. The burning buildings looked cheap and very poorly done - I hate flames coming out of windows with little else happening.

The kids were very annoying and if they had just listened from the beginning the story would of ended before it began but there goes the problem - what came first the chicken or the egg - seriously how much of this is actually true. Actually before typing up the review I typed in Lord Denton and found his character did not exist and neither did one of Tom's daughters. Oh and Tom's wife was actually alive and they had money as a maid actually died that night - which throws the whole synopsis out of the window.

But, back to the DVD...... if you are looking for the truth of what actually happened in the 'Great Fire of London' do not watch. But if you want some fabrication which has little to do with the fire and more to do with the king and his lack of funds and how most people thought he was a joke, with the side line of a love story, affairs and killing of catholics than this is the movie for you.

On a personal note - do not get me started on the wigs - seriously who ever told the rich men that wearing a curly wig will make them look (I don't know - silly, stupid, ridiculous) rich and manly... really should of been hung.

When his job along with that of his co-worker are threatened, Walter takes action in the real world embarking on a global journey that turns into an adventure more extraordinary than anything he could have ever imagined.