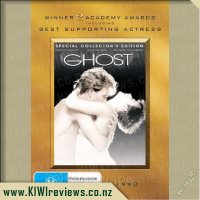 Think of the most touching love story you ever saw. Think, too of the brightest comedy, the most astonishing supernatural tale and a sleek mystery-thriller. Did you come up with four separate films? Or are you among the millions of fans and critics who've discovered Ghost, the No. 1 film of 1990?

Ghost will surprise you, delight you, make you believe. Patrick Swayze plays a ghost who teams with a psychic (Whoopi Goldberg) to uncover the truth behind his murder - and to rescue his sweetheart (Demi Moore) from a similar fate.

Here I am, in my thirties and I had never seen Ghost before, my friend rectified this last night and I have finally seen the film in its entirety. It is, though, a film that I have heard of numerous times, after all that pottery scene and Unchained Melody are embedded in pop culture and has been parodied numerous times. The cast is nice and small, four main characters, which helps keep the pace and you don't feel like there is too much thrown in. Of the main four actors, Whoopi Goldberg is the one I grew up with most, between Sister Act 1 and 2 and her role in Star Trek, so I looked forward to seeing more of her.

The plot wasn't anything new, I've seen several movies with a similar plot, some of which were far funnier, action filled or better acted, but it is a product of its time. The acting was good, though I felt that Whoopi and Vincent Schiavelli (the Subway Ghost) were the stand outs. The special effects were decent enough, I do like the 'ascending to heaven' effects when a character dies at the hospital but beyond that there was nothing that stood out. My pet peeve for this film would have to be how much time was spent with us gazing at our two main characters as they shed tears, don't get me wrong, I like films that show men showing emotions, but it did start to drag along a bit and I must admit that at the end, when all was well and good, I was wanting it to hurry up and finish.

I can't say that I would ever watch this again but it did surprise me and wasn't the pure schmaltzy romance film that I expected, and that even though I knew exactly what track it was headed down within the first couple of minutes... it was a nice enough way to pass the time.

I absolutely love Patrick Swayze and have seen most of his movies a few times over and this one is no exception. One of my other favourite actors is in this as she is a great comic actress, Whoopi Goldberg delivers laughs and is so believable as someone who suddenly discovers that her powers are real.

I really enjoyed the romance and comedy that this movie delivers. I love how Whoopi manages to portray someone who is scamming and is weary of being scammed. The story is well done, you are not left wondering and there are parts that you want to be able to reach in and help Molly, Demi does a good job at playing the part of the innocent person who has no idea that she is in danger. I'm really glad that the movie ended the way it did as the bad guys didn't get what they needed and instead got what they deserved, if only that happened in real life.

I'm not sure if the movie is supposed to be a drama, a comedy or a romance but it does fit all three and delivers incredibly well in all three areas. As I said I love Patrick Swayze but I know not to expect any more of his movies so I will have to be happy with having the DVDs and watching them over and over, or until the kids complain about the old movies.