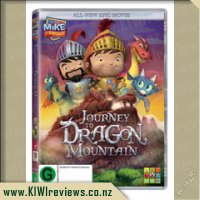 Disclosure StatementFULL DISCLOSURE: A number of units of this product have, at some time, been supplied to KIWIreviews by Roadshow (NZ) Ltd or their agents for the purposes of unbiased, independent reviews. No fee was accepted by KIWIreviews or the reviewers themselves - these are genuine, unpaid consumer reviews.
Available:
October 2014

Journey to Dragon Mountain is the first feature-length outing for Mike the Knight.

In the special, Mike's father the King is on a mission to save Glendragon by returning a crystal jewel to the giant dragon of Dragon Mountain. Mike and his sister Evie secretly follow their father and unfortunately for the King, Mike's attempts at being knightly only make the mission harder. But when Evie accidentally causes a rock fall, it's Mike who bravely saves the day.

We have borrowed several Mike the Knight DVDs from the local library over the last year and my girls (6 and 4.5 years) have always enjoyed them. This DVD is different from any that have gone before. It isn't a series of short episodes but rather it is feature length (one hour long). My youngest didn't notice that it was longer than normal. When it had finished she asked me to play the next episode and still wanted more once I had played all the extras on the DVD ( biographies on the characters).

One of the big advantages for me of this being feature length was that I didn't have to listen to the theme song repeatedly. The opening credits were as you would expect for a movie but the Mike the Knight theme song, that always gets stuck in my head wasn't used until the final credits. There were several songs throughout the movie that almost turns it into a musical. I love the minstrel with the harp that narrates parts of the story.

As usual Mike has good intentions but he and his sister Evie cause chaos before they can prove their worth. Mike is determined to prove he can be a real knight but it isn't as easy as he thinks. When the kids catch up with their father, The King, they all decide that working together as "Team Family" is best. It is all about praising each other for their strengths and co-operating.

My girls both loved Gargoyle. They laughed at his antics. I must admit he is very cute. It is a fun DVD that young children will really enjoy.

Sea Patrol 5 Damage Control follows the crew of HMAS Hammersley as they patrol the coastline of Australia, protecting the nation's borders. Every hour of every day, in all weather imaginable, young men and women battle the elements and the odds to defend Australia's borders and enforce its
economic zone.

They provide security, surveillance, protection, support and relief for the world's largest island, facing two of the biggest and most dangerous oceans on the face of the earth.