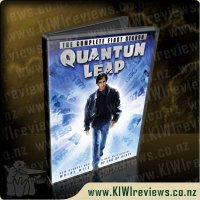 Theorizing that one could time travel within his own lifetime, Dr. Sam Beckett stepped into the Quantum Leap accelerator and vanished... He woke to find himself trapped in the past, facing mirror images that were not his own and driven by an unknown force to change history for the better.

His only guide on this journey is Al, an observer from his own time, who appears in the form of a hologram that only Sam can see and hear. And so Dr. Beckett finds himself leaping from life to life, striving to put right what once went wrong and hoping each time that his next leap will be the leap home.

I have loved Quantum Leap since it first appeared on TV. I rediscovered it when I my first child was born. For the first couple of weeks she wouldn't feed from me so I had to both bottle feed her and express. I wanted something to keep me awake in the middle of the night when all the TV was trash. I had discovered from watching another TV series on DVD that the length of the episode was ideal.

Every episode of Quantum Leap surprised me. The main character, Dr Sam Beckett, finds himself in a different place and a different time as a different character that has to change events. He could be anywhere or anything and usually doesn't know until he looks in a mirror. Watching this show has always made me feel great because I know that Sam will solve everything.

Quantum Leap appeals to lots of different people. My other loves it although she isn't usually into anything supernatural. Although the special effects aren't as flashy as modern shows it doesn't date probably due to the fact it is in lots of historical settings.

What TV show could pass off one man playing a range of characters from a lecherous old professor to a Mafia hit man to a black man in the segregated South? Quantum Leap. This is a TV show that came out in 1989, one that I grew up watching over and over again in re-runs and lately on DVD at home. It's a TV show that I don't think I'll ever get tired of and that I keep hoping they'll one day bring back.

Scott Bakula does an amazing job as Sam Beckett, a quantum physicist who when trying to prove a theory inadvertently made a mistake and woke up to find himself in a body that was not his own. Sam has no idea who he is, and has to figure out the life he has leaped into on the fly, by paying attention to everything that is being said and done around him. This, naturally, leads to some awkward and funny situations.

Enter Al, played by Dean Stockwell, who appears as a hologram that only Sam can see. Al communicates with Ziggy, their computer system, to give Sam information which could help him in some situations, see where people are and help Sam figure out his reason for being in that host. Each show features Sam as just one person, who had something go wrong, that Sam is there to put right, before leaping into another person in another time.

This show has a range of comedy, drama and melodrama, social commentary, nostalgia, and science fiction and they all blend so well that this is a great show for a wide range of people. Well worth watching. And the theme music... One of the best, EVER!

Its Star Trek, but not as we know it! STAR TREK THE NEXT GENERATION on DVD and with completely NEW packaging.