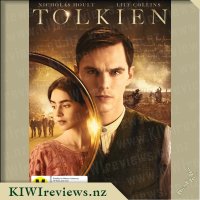 Disclosure StatementFULL DISCLOSURE: A number of units of this product have, at some time, been supplied to KIWIreviews by Universal Pictures NZ or their agents for the purposes of unbiased, independent reviews. No fee was accepted by KIWIreviews or the reviewers themselves - these are genuine, unpaid consumer reviews.
Available:
October 2019

"Tolkien" explores the formative years of the orphaned author as he finds friendship, love and artistic inspiration among a group of fellow outcasts at school.

I am glad that I read the Hobbit and the Lord of the Rings novels when I was younger because having that background knowledge was an important prerequisite for getting the most from "Tolkien". Some of that same knowledge could also be gleaned from Peter Jackson's movies, but there are references and descriptions in the actual books that could not be translated to film simply because there are too many of them. That would have resulted in several more Ring sequels if everything had been included!

As it was, I was able to just enjoy the film for itself - although "enjoy" is possibly too weak a term for what turned out to be an insightful window on the world of the young Tolkien. Dome Karukoski's interpretation is inspired by the fantasy world Tolkien developed for himself from childhood, encouraged by the stories his mother used to tell him when he was small. These fantasies led to the creation of The Hobbit, and later to the Ring saga: books heavily influenced by Norse mythology, the mediaeval Nibelungenlied, and to a lesser extent, Germanic mythology and Christianity. Real-life events in the book continually morph into vivid representations of a surreal world simultaneously magical and seductive.

Tolkien is played by Nicholas Hoult, who is tailor-made for the role. He has just the right combination of appropriate facial expressions (including deadpan!) and enthusiasm, something which Tolkien was famous for when focusing on one of his favourite activities. His future wife, Edith, is delightfully portrayed by Lily Collins. I was intrigued to find, on watching the CD extras, that her accent in real life is nothing like that presented in the movie. Although she was born in England, she moved to the United States at a very young age, but she had me convinced that a British accent was her normal style! Rounding off the cast are Colm Meaney as Father Francis, Tolkien's guardian and a major influence in his teenage years, and Derek Jacobi as Professor Joseph Wright who helps to inspire Tolkien's passion for philology - two outstanding supporting roles.

Comradeship is an essential theme of the movie. Always an outsider, Tolkien first finds his place within the school system in a small group of boys whose friendship is destined to last through to adulthood. The links between the boys are strengthened when they form a society of their own - the TCBS (Tea Club, Barrovian Society), complete with the Old Norse battle cry "Helheimr!". The power of comradeship (or fellowship) is also a theme running throughout Tolkien's novels; it is testament to his own experiences as a unique, somewhat isolated youngster who nevertheless needed the support and encouragement of his peers.

There is little linear narrative to the film; the story moves freely between time periods, almost as if one event or statement suddenly evokes the memory of something else. It is the impressions that provide the links, not events themselves; just as in real life a memory can be stirred by a sensory reaction - an item that reminds one of a similar item, lost many years ago, and the past events it recalls, or a line from a song that brings back a strong emotional response from the time it was first heard. The sequences from the Battle of the Somme are presented as part of Tolkien's memories of the fighting, not as real footage, so they have a dreamlike quality to them.

I was surprised that the movie has an M rating in New Zealand, and that it is recommended for an audience aged 16 or over. I could not find anything to justify this censorship rating; even the battle scenes are not unacceptably gory. It is more likely that a young child watching might become bored rather than frightened given that the subject matter is often presented introspectively rather than through constant action.

I like the way the references to language were included in the story. Because orthography and semantics are two of my own passions, I always appreciated the use of runes and neologisms (often based on authentic root forms) included in Tolkien's novels. Unpacking the meanings behind some of the personal and place names is a fun activity which I still remember doing with a couple of school friends; in this way we had our own version of the TCBS! One of these friends even used to decorate all her schoolbooks with Tolkien-inspired runes, beautifully drawn with a calligraphy pen.

For the rare person who has never read a Tolkien novel nor seen any of the movie versions, this film will not have so much resonance. Nonetheless, it could be enjoyed simply for the craftmanship evident in the production. Transitions are gentle and plausible. The lighting in the forest scenes is magical, with a muted, dreamlike quality to it. The scenes featuring the young Tolkien are delightful, tracking his adjustment to a new school where he is out of his depth to his eventual bonding with several other boys who are to become his group. Special mention should be made of Harry Gilby, whose portrayal of the young Tolkien is a perfect match to Nicholas Hoult's adult version.

In the screen universe of fast action, violence, adventure and noise it is a delight to find an alternative movie which is slower paced but never dull, beautiful but not brash, and partly factual but not rigid. It has the blurred lines of an impressionist painting. And what a pleasure to leave the screening with a smile on your face!