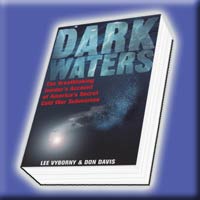 Disclosure StatementFULL DISCLOSURE: A number of units of this product have, at some time, been supplied to KIWIreviews by Penguin Random House or their agents for the purposes of unbiased, independent reviews. No fee was accepted by KIWIreviews or the reviewers themselves - these are genuine, unpaid consumer reviews.
Available:
Any good bookseller.

One of the most closely guarded secrets of the Cold War is revealed in this book. The fast-paced adventure narrative follows the creation, construction and clandestine Cold War operations of the smallest nuclear-powered sub in the US Navy, a one-of-a-kind ship so secret that it wasn't even given a name. It is a true story of covert operations, imminent danger, personal bravery, technological wonder and historic discovery in a deep underwater environment never before patrolled by mankind.

Lee Vyborny developed and served on the NR-1 and is uniquely qualified to write about the smallest Cold War warrior of them all, whose very existence was denied for years and whose missions have never been discussed, and the rich and varied characters associated with her.

Well one things for sure, the Yanks sure know how to keep a secret! I'm a bit of a military buff, but I wasn't even aware that this thing existed, but thanks to the end of the cold war, information about this stuff is finally coming out, and certainly makes for an interesting read.

This is a well written book detailing what could be considered a very boring subject. If your not into military history in any way, it might seem a little dull, but the information contained inside is really quite amazing.

Reading about all the stuff this little ship and it's crew did was very interesting and did make me want to read further into this book just to see what else they got up to.

All in all a good book for all the military history buffs out there.

A superb second novel from the author of the multiple-award winning Saraswati Park.

Paris, London, and Bombay: three cities form a backdrop to a journey through Leela's twenties at the dawn of the new millennium, as she learns to negotiate the world, work, relationships and sex, and find some measure of authenticity.

Sharp, funny, and melancholic, Another Country brings a cool eye to friendship, love, and the idea of ... more...