Why Am I So Tired? How to put fuel back in your tank. review 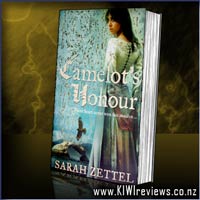 Disclosure StatementFULL DISCLOSURE: A number of units of this product have, at some time, been supplied to KIWIreviews by HarperCollins or their agents for the purposes of unbiased, independent reviews. No fee was accepted by KIWIreviews or the reviewers themselves - these are genuine, unpaid consumer reviews.
Available:
June 2006

A knight of the Round Table must keep a close watch on his honour... and his heart.

In the untamed country of the Welsh borders, Elen's widowed mother is keen to form an alliance with King Arthur to protect her lands and family. But she is opposed by Urien, a ferocious local chieftain. One night, after attending a difficult birth, Elen returns to find her home in ruins and her mother brutally butchered by Urien's men.

Morgaine, Urien's paramour and Arthur's half-sister, will stop at nothing to prevent Elen from gaining justice and vengence. But as she has reckoned without Elen's courageous determination, and without the valiant young knight Geraint, who seeks to prove himself worthy of a place at the Round Table. What better way to establish his honour than to come to the aid of a fair maiden?

This story is based in the time of Arthur and the Round Table, and gives a thorough background of that time period. What makes the book interesting is that it is about some lesser known characters, rather than rehashing another story about King Arthur. This book is about young lady Elen and Geraint, a knight of the Round Table (and brother to Gawain who features in Camelot's Shadow).

When Elen's family are killed by the evil Urien, she seeks help from King Arthur. Geraint, the tall, dark, and brooding knight comes to her rescue after she has been cursed and bound to a hawk by Morgan the Fae. Elen calls on the help of the Fair Ones to regain her lands and end the curse. Geraint and Elen set off on a long quest for the King and Queen of the Fair Ones in order to defeat Urien.

The book is well written, with believable, strong characters and prose that makes the surroundings jump to life. The magic and fantasy is kept to a level that enhances the storylines without being overwhelming.

I really enjoyed this book and am looking forward to reading more of her work.

Sam Reilly leads the FBI's investigation, helped by Tess Chaykin, an archaeologist who witnessed the shocking theft. She takes him through the dark history of the crusading Knights and together they are plunged into a terrifying journey which forces them ... more...