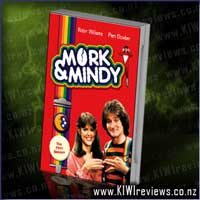 Disclosure StatementFULL DISCLOSURE: A number of units of this product have, at some time, been supplied to KIWIreviews by Roadshow (NZ) Ltd or their agents for the purposes of unbiased, independent reviews. No fee was accepted by KIWIreviews or the reviewers themselves - these are genuine, unpaid consumer reviews.
Available:
September 2007

Dispatched from Ork in his egg-shaped spacecraft, the lovable Orkan hurtles to Earth near the town of Boulder, Colorado, where he is befriended by pretty college student Mindy McConnell (Dawber). Mork's mission is to observe the bizarre customs of the earthlings and then report back to his great Orkan leader, Orson. He tries his best to adapt to his new environment - not an easy task when you innocently wear your clothes backwards, sit in a chair upside down, or blurt out "Shazbot!" when things go awry. It's an out-of-this-world series of laughs and escapades when human being meets humanoid hurricane in Mork and Mindy.

This is a series I grew up with, and I still remember rushing into the lounge as a kid whenever it was on, so I could lose myself in Mork's delightful antics for half an hour or so. A young Robin Williams is absolutely perfect for his role of an alien sent to Earth to get him out of under the feet of his leader, Orson, because he was forever getting into trouble with his sense of humour (a no-no on Ork!!), with his mission now to observe and learn as much as possible about the ways of the Humans. It has been years since I have watched Mork and Mindy, but I was to find that it still held the same charm as before, and found it quite easy to watch several episodes in one sitting. What pleased me even more, is that my 7 year old son was instantly a fan as well, sitting there chuckling away at the silly things Mork did as he tried to learn how to be a Human- no, we don't wear our clothes backwards, unless we've had a really rough night and getting dressed in a hurry, and he really puts a new spin on sitting on your face!! Since watching the first disc, there have been several times when I have had my son come and ask if he can watch Mork and Mindy. Definitely preferable to some of the stuff kids his age are watching out there today!! So young or old, if you're a Robin Williams fan, or enjoy some of the old style comedies, or are wanting something for the kids to watch that'll give them a giggle without subjecting them to the usual violence shown in most kids' shows these days, this is a series well worth giving a try.

This exciting mini-series uses stunning interactive CGI and draws on interviews with the world's top scientists to show step by step how a world is put together. A cosmic construction foreman supervises each stage in the building of earth, the solar system and the galaxy, but like any construction project there will be mistakes, and minor slip-ups have surprising consequences.