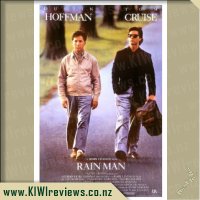 Raymond is autistic, but is able to calculate complicated mathematical problems in his head with great speed and accuracy. Their father has left his fortune to Raymond who doesn't even understand what money is for. Charlie is enraged by what has happened and by his father keeping Raymond's existence from him for his entire life.

He kidnaps Raymond from his residential home but then finds that Raymond will only fly Qantas. The two begin a long road trip that will lead them to an understanding of each other.

I thought I would write a review on this movie considering it's still fresh in my mind.

I watched this movie last night, I am a 21-year-old female who is currently loving on the Avengers movies at the moment, so a lot of amazing special effects and flashy lights and fast camera movements, in striking contrast I loved this movie, a lot of the camera choices were fixed and viewed from quite a distance, it was quite a slow momentum movie, and usually that doesn't really appeal to me, I find myself struggling to watch older movies purely for that reason, I, however, loved this movie so much, it was excellently written, and the performances were amazing! Dustin Hoffman was absolutely incredible!

I am not a massive fan of Tom Cruise but that could be the sofa jumping and Scientology speaking for me. I did, however, find his performance in Rain Man to be fantastic, as someone who has spent time with someone with Autism, Dustin's acting in this department was flawless, they honored the disorder, not being disrespectful, but acknowledging what it is like to spend extended periods of time with someone experiencing this disorder. There was a genuine connection between the two actors and there were a couple of scenes that had me in tears, I would be interested to watch the movie again to count how many times 'Raymond' says the word 'yeah' because it pops up a lot. The decision to watch this movie was a spur of the momnt decision, as one of the characters in my favourite tv show ' Supernatural' was referenced to 'speak like rain man'" and I felt as though I wasn't going to be able to fully appreciate the comment till I watched the movie myself and I am so glad I did.

I have seen this movie a few times, the first time I saw this movie I had no experience with autism and really enjoyed the movie since I didn't quite catch what was going on in full detail. I have watched it since having an autistic daughter who is a lot like Raymond, doesn't like change and everything is black and white with no grey in her world so I know how frustrating life can be, I wanted to reach into the TV and smack Tom Cruise as he was so impatient with his brother.

The actors did a fantastic job so realistic. Imagine finding out that you have a brother who you knew nothing about as he grew up in an institution and you decide to make him leave everything familiar behind. Imagine the frustration of having to deal with "issues'.

I really like the movie but I find I can't watch it as I still really want to slap Tom Cruise silly for his reactions to his autistic brother. I do admire Dustin Hoffman for the way he portrayed his character, when I do watch the movie I feel like I'm watching my life.

It is a great movie and I hope I can watch it again one day without wanting to slap Tom Cruise. There are some good laughs and some parts that were trying to be serious but ended up being funny.

Follow Dante on a harrowing journey through the nine circles of Hell as he travels through limbo, lust, gluttony, greed, anger, heresy, violence, fraud and treachery - all to save his true love, Beatrice, from the clutches of Hell's master, Lucifer.

Featuring a famous cast of voice talents, and told ... more...