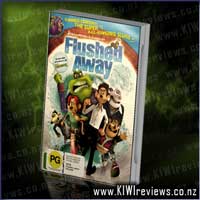 Disclosure StatementFULL DISCLOSURE: A number of units of this product have, at some time, been supplied to KIWIreviews by Roadshow (NZ) Ltd or their agents for the purposes of unbiased, independent reviews. No fee was accepted by KIWIreviews or the reviewers themselves - these are genuine, unpaid consumer reviews.
Available:
June 2007

Roddy is a decidedly upper-crust 'society mouse' who lives the life of a beloved pet in a posh Kensington flat. When a sewer rat named Sid comes spewing out of the sink and decides he's hit the jackpot, Roddy schemes to rid himself of the pest by luring him into the 'whirlpool spa'.

Sid may be an ignorant slob, but he's no fool, so it is Roddy who winds up being flushed away into the bustling sewer world of Ratropolis. There Roddy meets Rita, an enterprising scavenger who works the sewers in her faithful boat, the Jammy Dodger. Roddy immediately wants out, or rather, up; Rita wants to be paid for her trouble; and, speaking of trouble, the villainous Toad - who royally despises all rodents equally, making no distinction between mice and rats - wants them iced... literally.

The Toad dispatches his two hapless hench-rats, Spike and Whitey, to get the job done. When they fail, the Toad has no choice but to send to France for his cousin - that dreaded mercenary, Le Frog.

This has been a hit with my family since it first came out.

This was one of the first animated movies I managed to convince my husband to watch with me (back when he thought that cartoons were just for kids, puh-leeze) because I was still very much into animated movies (and still are today). Roddy is a house mouse who ends up in the sewers and discovers a whole mouse and rat world in it, full of shady characters and mice that don't live by any humans rules. I love the character growth, not only for Roddy, but for Rita as well.

Now, Whitey was by far my favourite and all because he is voiced by Bill Nighy, seriously love that guy, great actor. Another favourite is of course the slugs, they were brilliant, but the special features short music clips weren't that great, the only one I did like was "I Don't Feel Like Dancing" by the Scissor Sisters, other than that none of them are worth remembering. There's so many moments in here for not just the kids but the adults too (it was the perfect movie for my husband to watch as proof that animated movies can be lots of fun too).

I really enjoy this movie, so more than happy to sit down and watch it more than once with the kids.

I loved this movie! There aren't many CGI movies that hit me the way this one did. With thrills and spills, humour on levels appropriate to young and old, suspence, drama, and the inevitable romantic aspect, it was like watching a cartoon episode of Shortland Street, in RatWorld! Having had pet rats and mice in my youth, I sure as heck HOPE this is NOT what is going on in our sewer system.

Favourite characters would have to include Roddy, naturally, and The Toad (for his sheer maniacal intensity, if nothing else), Whitey (dmwitted henchrat though he was, he had some astoundingly good lines... Japanese flag...

) and of course my most favoured... the slugs. Singing slugs with an almost telepathic ability to pick songs and lyrics appropriate to any situation. A hive-mind perhaps? nd one of them swallowed an i-Pod maybe? Hey, come on... it's about as plausible as anything else in this movie!

I was also taken with the engineering of the rat city. It makes me think that maybe the set designers loved watching MacGyver as much as I do, because the way in which rubbish was recycled and re-purposed was incredible... from arts and crafts, to clothing, to buildings and vehicles... I LOVED the cordless blenders being used as jetski's... utterly hilarious... and a good example of why you should NEVER use a mains-powered toaster in a wet environment.

Overall, sure to become a classic family movie, this is one the whole family can enjoy, snugged up on the couch under a spare duvet, with a jumbo bowl of fresh popcorn to share. Pass around the thermos full of hot chocolate and the packet of mini gingernuts, and you're all set for an evening of laughs. The adults will spot a few 'subtle' jokes that should fly right over the little heads, so be careful not to laugh too loud unless you want a few awkward questions afterwards.

The bonus extras are worth a look, but I personally preferred the slug songs in the movie, over the bonus video tracks... but that's just me. I would have loved to have seen something a little more 'juxtaposed', like the Slugs sing a Marilyn Manson classic or something...

After moving his family back to his hometown to be with his friends and their kids, Lenny finds out that between old bullies, new bullies, schizo bus drivers, drunk cops on skis, and 400 costumed party crashers sometimes crazy follows you.