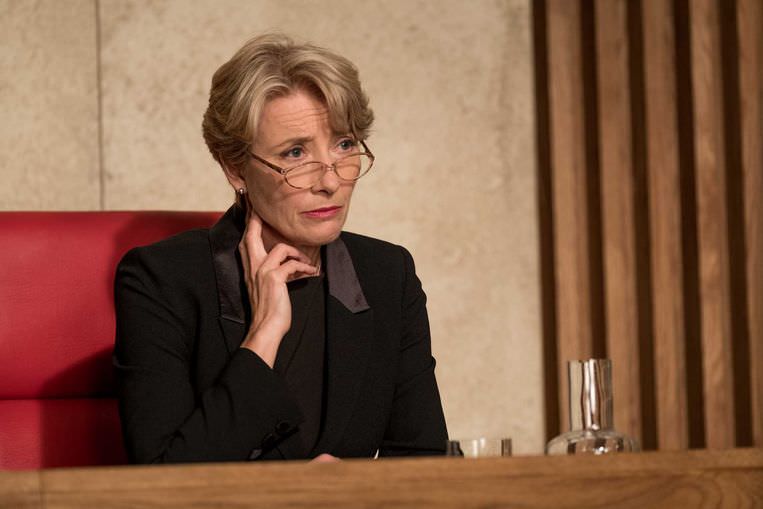 Following a family court judge that frequently presides over contentious cases, The Children Act is an intriguing film full of moral and ethical dilemmas.

To give some context to those unaware of the Children Act 1989 in Britain, the first section introduces the relevant information: "The Children Act 1989 states that children's welfare should be the paramount concern of the courts. It also specifies that any delays in the system processes will have a detrimental impact on a child's welfare. The court should take into account the child's wishes; physical, emotional and educational needs; age; sex; background circumstances; the likely effect of change on the child; the harm the child has suffered or is likely to suffer; parent's ability to meet the child's needs and the powers available to the court." This is the system that Emma Thompson's character Honourable Mrs Justice Maye has the final word on.

The Act gives rise to a lot of contention when you consider many of the ethical questions around healthcare. Whether faced with the question of separating conjoined twins so that one may survive, or whether to force a blood transfusion which goes against the religious beliefs of the family, such cases strip away the choice from the parents as these are decisions that will impact the child's health. Giving more strength to the story is the knowledge that the film (and novel) are both based on a true story.

Objectivity is a difficult thing to maintain during such emotional cases as those that involve life and death decisions regarding a child. The idea of a hospital taking a family to court in order to treat someone is something that you would never think to be necessary, and yet it is quite commonplace in Britain where religion has a much higher rate of practice than here in New Zealand.

The film follows two plot threads; the main plot follows the case of a Jehovah's witness child who requires a blood transfusion to be able to undergo leukaemia treatment, but transfusions are forbidden by the religion. The second plot line involves a look at marital issues between Fiona Maye and her husband Jack Maye (Stanley Tucci), where her career has taken precedence over her personal life.

The film brings forth the concept of a flawed, voluntarily childless character being in control of other people's decisions regarding how their children are raised and medically treated. An interesting quandry even before you start looking at the conflict between church and state, or are faced with the consequences of your decisions.

While intriguing, the film does struggle with its pacing. The setup for the films premise feels rushed, with several cases being brought forward that had as much focus on them. There was very little that told the viewer that this case was going to the significant case that would be the focus of the rest of the film. The marital storyline was really under-utilised and while Stanley Tucci did a brilliant job with the content he was given, it feels like there is so much context missing. We never got to see this couple happy, so being thrown straight into this cold, closed off, emotional emptiness...it doesn't come across as genuine as I would like.

Emma Thompson does brilliantly as a judge. She oozes the essence of control and power, but all other aspects of her character do feel weak. Fionn Whitehead does well at the overeager near-obsessive personality, but there is no subtlety to his mannerisms, and does look like he would be much more at home in a mental hospital. I would actually go as far to say that the minor supporting role of Nigel Pauling, portrayed by Jason Watkins, was the performance that felt the most authentic.

Overall, The Children Act was well done, but it's length let it down, causing it to rush it's set up, and losing any suspense or tension. With a run-time of 105 minutes, I would have much preferred something closer to 130 minutes, to get the pacing right, and allow time for us to truly engage with the characters. Apart from Nigel and Fiona, The remainder of the characters only really have a few minutes of screen-time. And it shows in the lack of engagement. Regardless, it's an interesting insight into the British family court system, and raises a lot of questions to ponder about once the film is finished.