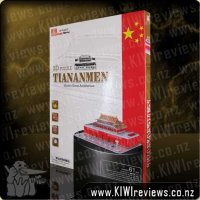 The Tiananmen, or Tian'anmen, literally means "The Gate of Heavenly Peace", is a famous monument in Beijing, the capital of the People's Republic of China.

Tian'anmen is located along the northern edge of Tiananmen Square.

Okay, this has got to be one of the coolest things I've done. As soon as I saw the box my heart started to beat fast with excitement! The image of the finished model was very appealing, just the thought of having this thing sitting in my room was great. Assembling this 3D puzzle was not as easy as I thought it would be, getting some of the pieces into the slots was a little difficult, and the instructions got me a little confused at some points.

The finished puzzle looked awesome, it was cool how the front doors of the Tiananmen could actually open and close, plus there were the stairs on the model, both made this model more fun. One thing that would've been cool was if there had been some extra parts to go on the bridges so that they looked more like bridges instead of barricades. One of the hardest things to put in it's slots were the pillars on the hall, which is located on top of the entrances; it was fiddly, but I got there in the end, and it certainly had a good-looking outcome.

It was great having little blurbs about the real Tiananmen on the instruction sheet, that way I could learn while I played. From those blurbs I learned that the Tiananmen was sometimes called the gateway to the Forbidden City, but it was actually the entrance to the Imperial city, were the Forbidden City was located. I would say that due to the difficulty of the assembly, this product would be suitable for people 10+, because this 3D puzzle seems to be good for adults as well as children. I am positive that you will love this product; it is a great activity to do when you want to do something productive. Enjoy!

A group of cats has been training very hard to master their profession shooting off the biggest and best fireworks in the world! Although they are still rookies, they hope to become experts someday. Which cat can put on the most explosive fireworks display?

The goal is to collect Fireworks Tiles and arrange them on your City Board to create stunning displays. On your turn, you launch the Fireworks Die out of the barrel and into the ... more...