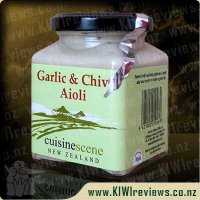 Disclosure StatementFULL DISCLOSURE: A number of units of this product have, at some time, been supplied to KIWIreviews by Cuisine Scene or their agents for the purposes of unbiased, independent reviews. No fee was accepted by KIWIreviews or the reviewers themselves - these are genuine, unpaid consumer reviews.
Available:
Purchase direct from Suppliers Website

Great mixed with sour cream to make a dip to eat with raw vegetables, or as a dressing for your favourite pasta or chicken salad. Add a spoonful to your mashed potatoes; use with seafood, on a chicken sandwich, or with hot wedges. Yum! Note: this product contains eggs and a food preservative, potassium sorbate.

My husband is a big fan of aioli and we are both fans of garlic so when we saw this we thought that we would give it a try.

My husbands first try with this was when he cooked up some fish cakes, he usually settles for mayonnaise but as we had this, he popped some on the plate. He set to dunking his fish cake in it, gave it a try and promptly decided that he didn't like it and that he wanted to have his usual sauce for the meal. His complaint was that it didn't taste quite right.

I then decided to use this in our dinner, mashed potatoes for dinner and I decided that this could make the dish a little bit creamier and so I mixed a couple of tablespoons worth through the dish. Upon tasting I couldn't really tell that it was there, there was a faint taste of it but not much so we all decided to add some more. The kids enjoyed it and gobbled down their dinner but my husband and I didn't really enjoy it at all and didn't end up finishing our meal.

For us this is a no go and we won't be buying it again.

I recently got a few different products to try from cuisine scene and I have to say I haven't been disappointed in any of it. Buying from cuisine scene is money well spent. I love aioli so couldn't wait to taste it in fact the day it arrived I tried it straight away and since then I have found many different uses for it and tried it in a number of dishes.

First night I tried it with baked potatoes, I mixed it with a little sour cream and it was delish. I made up a little too much so the left over aioli and sour cream mix I used it as a dip with ready salted chips! I have also mixed it though mashed potatoes to spice them up a bit, added it to burgers and also mashed it with egg for egg sandwiches.

As it is a strong flavour a little of it goes a long way, even mixing it in with sour cream still gives you a wonderful taste sensation. When the jar is gone I will be investing in some more for sure!

We love aioli in our house and if we are having kumara chips or roast/mashed potato a jar this size would normally be gone in just that one meal as we all gorge on it and have way more than we need. I was super stoked to get to review this as I knew our family would love it.

Well I can happily say we did love it and it didn't last long at all between the four us it was gone in no time! The first thing I did with it was mixed some chopped mint leaves and cucumber with it and served it with koftas and couscous for our dinner. The recipe had called for natural yoghurt but I used the aioli and think it gave it a far nicer taste and texture as it had the sweet creaminess whereas the yoghurt would of been more bitter. I ended up not wanting to dip my kofta in the dip as I just wanted to scoop the aioli coated cucumber up with my fork and eat it on it'w own to savour the flavour.

I also bought some kumara chips from the supermarket and cooked these to have with what was left of the jar of aioli. This is the way we would normally serve it when we have bough aioli in the past so had to try it this way. It was divine with the sweetness and crunch of the kumara chips with the smooth creaminess of the aioli. I felt the garlic taste was very mild which was good as I don't like it to be overpowered with the taste of the garlic. Towards the end we were all fighting to get the last of the aioli out of the jar!

This is definitely one of the best aioli's I have ever tried and I would certainly buy it again. I would love to buy a range of these chutneys and sauces to make a Christmas hamper up for the family as I think they are beautifully presented and would look great in a gift hamper.

We are huge aioli fans in this household. Miss 3.5 and Miss 5 choose this over any other sauce for dipping their hot chips. When I produced Cuisine Scene's Garlic and Chive Aioli for us to review they were keen taste testers. Dinner was oven chips and fish fingers both tasted extra good with our new aioli.

I thought that all aioli was created equal and just bought the one that was on special at the supermarket but since trying Cuisene Scene's version I know the difference between budget and quality. This was creamy with the right amount of garlic so I didn't scare away vampires but wasn't bland either. The chives were a great addition that made me wonder why other brands didn't think of doing it.

The label suggested serving it with seafood (they probably envisioned something classier than fish fingers) potatoes and pasta. This gave me an idea when I opened the fridge searching for breakfast. Inside was some pumpkin left over from the night before. I heated it in the microwave and then stirred in some aioli. It tasted great and my girls wanted some even though they usually avoid pumpkin. I would be keen to try it with mashed potato or kumara as I'm sure it would taste great.

I will be hiding the rest of the jar from my family as this tastes too good to share.

I am a die-hard fan of Aioli... have been since a wonderful pub owner introduced me to it on one of his open steak sandwiches back in the mid-90's. Around the same time I discovered Cider with Blackcurrant juice. #Yum

I tried this as-is on toast and immediately fell in love with it. I had to try it across a wider range of tastes through, so I made a chicken and salad wrap with some of this spread generously across the wrap. It was such a hit, the smell alone had my wife asking for one as well. Once she had a taste of mine... well... it was an exercise in hostage negotiation to get it back.

I also mixed some of this with some sour cream and used it as a dip, to great effect. Sure, I could have had it without the sour cream, but I didn't want to use it all up, and was curious how much "dilution" could be done without totally washing away the flavour. The answer is "enough" - using only 3 tablespoons, and a whisk to aerate the mix a bit (light and fluffy dip is amazing) I managed to make enough dip to fill a decent sized dip bowl, which would normally feed a party of 10-12 people.

Overall, I love this aioli. The flavour is something I can't easily describe, but can say you should like it if you like tangy flavours. For my 'everyday usage' I wouldn't buy this one though, simply because it would be a real shame to reach the point where I take this wonderful flavour for granted. This is a "special occasions" one for sure. The cheap budget brand I get from Pak'n Save will do for the kids sandwiches and my day to day dining.

I love the cutest of this little jar and also love the seal bit to know if its been opened or not. The label it nice and clean with a clear label on what is in the jar. Opening the jar gives a very strong smell of garlic, which I love. Having a quick taste with my finger I can really taste the chives and has a great taste of garlic though it aswell. This has to be the far best Ailoi I have tasted it doenst taste oily or have a strong aftertaste.

I love that it can be used it so many things without overpowering the other item, we used it on the side to dip home made potato balls into. Also dipped chicken into the ailoi and it was so good. My daughter who is 5 asked for some and it was gone off her plate before we knew it and wanted more. My son who is almost 4 took a little longer to like it, but he didn't spit it or refuse it and in the end used it as a sauce to dip his potato and enjoyed it. I have to say this went down a treat in our house and you don't need a lot of it to give extra flavour in things.

My daughter says "its nice and sweet", my son says "like its yummy". I will def be looking at how long a jar will last for. I reckon it would be awesome in a potato salad. The best thing I like is this one is Gluten Free.