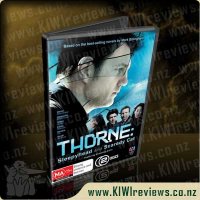 Detective Inspector Tom Thorne investigates a series of bizarre murders, each as complex as himself.

Sleepyhead - Thorne is dragged back into the nightmares of his past, as he heads up the investigation into a series of horrifying attacks on young women. As the investigation progresses, it becomes clear the killer's intention is not to kill but to put the victims in a locked-in state. The similarities between the victims and the old case surrounding the death of a man named Frank Calvert have tensions rising within the team.

Scaredy Cat - A killer selects his victim at St Pancras station, follows her home on the tube, and strangles her to death in front of her child. A second body is discovered at the same time, killed in exactly the same way, at the back of St
Pancras station. It is a grisly coincidence that eerily echoes the murders of two other women who were stabbed to death months before on the same day.

This is a fantastic DVD set in the Detective Crime/Murder thriller type genre. This set offers two DVDs. There is a mini-series style crime story, one on each disc. The stories all involve Tom Thorne who is a wonderfully dark and complex character. These stories are written or based on the work of Mark Billingham, who is a great author of crime fiction.

I was first introduced to Tom Thorne in book form, when I read "The Burning Girl". What I found was that Thorne seems to get himself really embroiled in the crime, and solving it. Where there is a young victim, he gets even more involved and often puts himself in ridiculously dangerous situations as a result. These character flaws are really evident in both of these DVD stories as well.

I was able to watch one DVD in one evening, which was ideal for me. It's about the same length as a long movie. Each episode builds the tension. The lighting, and grittiness really added to the stark situation the victims and police team find themselves in. There is quite a bit of the good cop/bad cop stuff too. It's really hard to say whether there are any 'good' cops on the team. Every one has their own set of flaws.

In some ways the gore level was a bit too much for me, but it could have been higher as well. You see some of the violence on screen compared to other shows that often elude to something without showing it. For me there were one or two moments which I could have happily done without having the image. And even now I can recall in full detail the scenes that I didn't really like watching. However, it was very in keeping with the books so I can't really knock it. Overall, I was very impressed with this and will be recommending this to my fellow crime drama watching friends.

Led Zeppelin Masters come to the Civic Theatre in November 2017 for one night only, to rock the house to its core and give the heaviest symphonic salute to one of the great rock bands of all time.

Direct from a huge sell-out tour of the UK, including a hugely successful concert at London's West End Palladium Theatre, and following two sold-out shows in Sydney at the Opera House, Auckland now gets to experience the musical genius ... more...