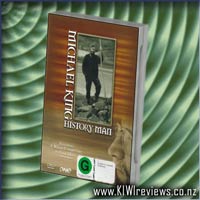 Disclosure StatementFULL DISCLOSURE: A number of units of this product have, at some time, been supplied to KIWIreviews by Roadshow (NZ) Ltd or their agents for the purposes of unbiased, independent reviews. No fee was accepted by KIWIreviews or the reviewers themselves - these are genuine, unpaid consumer reviews.
Available:
9th December 2004

I found History Man to be a perfectly adequate and typical documentary about an exceptional Kiwi historian. It is not the kind of documentary that would be of particular interest to those who are not already drawn to the people who quietly write our histories and venture to place our past into context.

That said, for those who are interested in learning about Michael King and his work I'd recommend this documentary as an apt introduction. The focus of the documentary, Mr Kings work in chronicling Maori history, is interesting and highlights what a great contribution he made when it comes to understanding the history of Maori, and the history of New Zealand as a nation of unique identity.

It is unfortunate that Michael King himself died before being able to contribute to his story, as I'm sure he would have injected his passion of history into the documentary.

Semi-retired policeman Henry Crabbe (Richard Griffiths) would rather be cooking than catching criminals.

Unluckily for him, he happens to be good at both. His boss, Assistant Chief Constable Fisher (Malcolm Sinclair) doesn't want to lose him, and his accountant wife, Margaret (Maggie Steed), worries his new career as a restaurateur won't be financially viable.

While indulging his culinary passions, Crabbe remains on call for those particularly tricky cases that Fisher sends his way. Larger than life as he is, sometimes there just doesn't seem to be enough of Crabbe to go around.