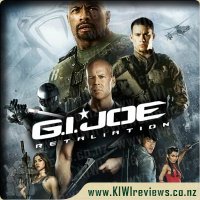 Disclosure StatementFULL DISCLOSURE: A number of units of this product have, at some time, been supplied to KIWIreviews by Hoyts NZ or their agents for the purposes of unbiased, independent reviews. No fee was accepted by KIWIreviews or the reviewers themselves - these are genuine, unpaid consumer reviews.
Available:
in cinemas from 28th March 2013

The G.I. Joes are not only fighting their mortal enemy Cobra; they are forced to contend with threats from within the government that jeopardize their very existence.

As far as sequels go, Retaliation is a good one. I'd even go as far as to say that it is better than the original. Retaliation finally gave us something that the G.I. Joe films was missing. A true challenge. In the original film, the G.I. Joe's existed in full force with effectively unlimited funding and resources, and that made the movie stale. Retaliation, however cliche, has these resources stripped from them and their squad almost completely obliterated. Fighting back against immeasurable odds is what makes a great action film.

The switch in lead role from Channing Tatum, to Dwayne "The Rock" Johnson, was the deciding point for most people regarding liking or disliking the movie. Channing's early disappearance caused much controversy during early screenings, and ultimately led to the delay of release due to re-editing. I however find Dwayne Johnson excelled in the role of Roadblock, providing a much more authoritative figure head that gave more direction.

The relationship between Storm Shadow and Snake Eyes was expanded upon in this sequel, and provided a viable sub-plot that the movie could alternate between. Initially a difficult relationship to quantify and express due to Snake Eyes' mute disposition, the writers work through it and come out at the end with an impressive amount of character growth.

I found Firefly to be the most engaging villain in Retaliation, purely because of his lust for violence and fire. As far as villains go, the more eccentric ones are more fun to watch, and whilst you want the Joe's to come through, you really want to see him escape so that you can see him again in the future.

Effectively, this movie is action-packed, and is much more stable than its predecessor. Character growth through extensive explosions and gadgets, this movie will be sure to entertain.

Sequelitis... it's a curse. When a storyline is so thin at the end of one movie, that the follow-on has to start by severing all ties. Yup, you got it... this movie starts with the only survivors from the first movie getting in a spot of terminal bother.

Featuring the acting "talent" of Dwayne 'The Rock' Johnson and the quirky one-liners and dry wit of Bruce Willis, this movie has lots of action, plenty of explosions, acrobatics and martial arts galore... and virtually no plot worth mentioning. Pretty typical fare from a movie of this sort... just look at the latest Die Hard or The Expendables movies. If all you are after is a good dose of mindless action, then this will be a rave smash hit for you. If you want something with a bit more depth and character development, like the first GI Joe movie, then you may find this is closer to the original comic/cartoon series and 'action toy' theme than anything story-driven.

What really had me scratching my head in a serious WTH moment was a particular character loss. He spent his entire screen-time as a pair of semi-mobile eyes, and was dispatched with a glib "...you're off the team." Surely a small bomb wouldn't have been too much to ask?! However, on the plus side, I learned a really interesting biological fact about R.E.M. sleep.

Overall, this is far more of a 'popcorn and beer' movie than anything you need to really engage your brain for. If that's all you're after - something better than adverts you can watch between sports games - then it's a great one to grab. Or, if, like me, you love to see interesting weapons and gadgets in action, then it's sure to please you more than the latest James Bond movies did. It's chewing gum for the eyes... 'nuff said.